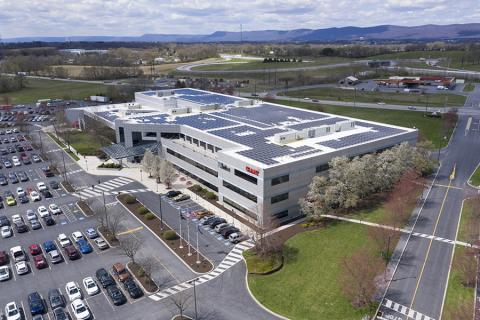 Giant Food Stores has completed of the first phase of a 2.4-megawatt solar project at its Carlisle, Pa., support office. The company marked the milestone by unveiling a 625-kilowatt rooftop solar array during a ribbon-cutting ceremony attended by state officials and representatives from EnterSolar, the project’s developer, and energy company PPL Electric.

“There’s no better time than Earth Week to celebrate this significant milestone in Giant’s sustainability program, and it’s especially gratifying to do so at our home office,” noted VP of Strategy Manuel Haro. “At Giant, we strive to make every day Earth Day, and that’s why we continuously explore new and innovative ways to reduce our operational footprint. Our rooftop solar project is just one of many ways we are making good on the promise we made to the communities we serve – to be a good neighbor and do our part to protect and preserve the planet for future generations.”

Designed and developed by New York-based EnterSolar, and managed on-site by Retail Business Services, the services company of Giant Food Store’s parent company, Ahold Delhaize USA, the project kicked off in December 2018 and received permission to operate last month. The project consists of 1,812 panels that convert sunlight into a flow of clean electricity that feeds directly into Giant’s electrical system within the building, thus powering a portion of its energy needs from a renewable on-site source.

“Addressing climate change and reducing our reliance fossil fuels will require commitments from companies like Giant to take an active role in changing how we think about the energy we use,” said Pennsylvania Department of Environmental Protection Secretary Patrick McDonnell. “Switching to renewable sources and increasing energy efficiency will both save the company money and improve the environment.”

During months of high solar resource and low building energy needs, the solar array can provide more energy than the building uses. In that case, the excess solar energy is metered, sent back into the surrounding utility grid, and absorbed by other homes and business in the area, enabling Giant Food Stores to earn energy credits that can be used in low solar-production months. The grocer is still connected to the PPL electrical grid when solar energy is insufficient for the building’s needs.

Work on the second phase of the project, a 1.83-megawatt ground-mounted solar array, is currently underway. The ground-mounted array will consist of an estimated 4,968 panels spanning nearly 5 acres of the corporate campus.

Giant Food Stores also plans to establish “pollinator habitats”’ to support bees and other pollinators in a bid to address bee-colony loss. Pennsylvania has been particularly hard hit by the dwindling of the bee population, with a honeybee die-off rate of more than 60 percent. The grocer will work with EnterSolar and local landscape and environmental teams to plant native plant species and flowers that are welcoming to pollinators and will help them thrive in the region.

When the entire solar system is completed later this year, it will offset 100 percent of the Carlisle facility's electricity needs. The 2.4-megawatt system will produce more than 3 million kilowatt-hours annually, providing both economic and environmental benefits to Giant Food Stores and the surrounding community.  According to the company, the system’s environmental benefit will be equal to reducing 4,557,643 pounds of carbon dioxide, or powering 476 homes, annually.