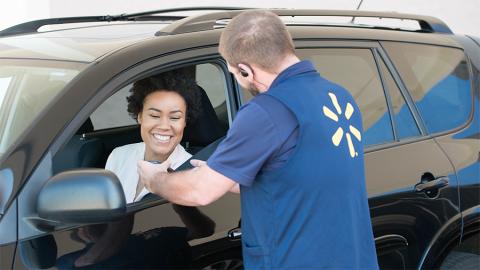 Aided by its embrace of new processes and technologies, Walmart Inc. has reported a U.S. comparable-store sales increase of 3.4 percent for its first quarter of fiscal 2020, the mega-retailer’s best Q1 comps in nine years and the fourth straight quarter above 3 percent. Further, according to the company, U.S. operating income was better than expected, seeing a 5.5 percent rise.

At the same time, Walmart U.S. ecommerce sales growth of 37 percent was due to strong growth in online grocery, in addition to the home and fashion categories on Walmart.com. As of Q1, the company had about 2,450 grocery pickup locations, almost 1,000 stores with grocery delivery, and more than 900 pickup towers.

“We’re changing to enable more innovation, speed and productivity, and we’re seeing it in our results,” noted Walmart President and CEO Doug McMillon. “We’re especially pleased with the combination of comparable-sales growth from stores and ecommerce in the U.S. Our team is demonstrating an ability to serve customers today while building new capabilities for the future, and I want to thank them for a strong start to the year.”

Indeed, the company’s continuing stellar ecommerce sales performance is key to its long-term strategy for overtaking its key rival in this space, according to a tech industry observer.

“Walmart understands that its ecommerce growth is closely tied to its technical abilities,” said Eli Finkelshteyn, CEO and co-founder of San Francisco-based Constructor.io, a cloud-based search-as-a-service.“With Amazon distracted in its efforts to reach into new industries, Walmart is continuing to capitalize on this opportunity to play technological catchup in ecommerce, and percentage-wise, Walmart will continue to exceed Amazon’s growth there. Walmart is inching in on Amazon’s technology territory, with recent announcements like the Intelligent Retail Lab and next-day delivery, but Amazon is struggling to match Walmart’s physical and logistic aptitude.”

Added Finkelshteyn: “Walmart, unlike many of its brick-and-mortar competitors, has taken the long view that competing with Amazon’s tech prowess must happen through both in-house innovation and bold acquisitions and third-party partnerships. Its massive purchases, like those of Jet.com and Bonobos, might have seemed strange at the time, but continue to lead to the box store’s massive ecommerce growth. And that growth continues to come not just at the expense of Walmart’s slower brick-and-mortar competitors, but even of Amazon itself.”

Operating income for Walmart dropped 4.1 percent, or 3 percent in constant currency, which the company said was better than planned, as solid results from Walmart U.S. and Sam’s Club were offset by this year’s inclusion of Indian ecommerce company Flipkart, in which Walmart acquired most of the shares in 2018.

In other Walmart news, CFO Brett Biggs cautioned that higher tariffs would cause consumer prices to rise, as reported by various news outlets, including CNBC.

Walmart operates more than 11,300 stores under 58 banners in 27 countries, and ecommerce websites, employing more than 2.2 million associates worldwide. The company is No. 1 on Progressive Grocer’s 2019 Super 50 list of the top grocers in the United States.