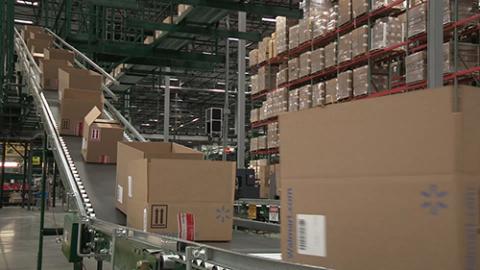 Walmart has launched its free NextDay delivery in Phoenix and Las Vegas, with plans to expand to Southern California next. There is no membership fee for the service, but there is a minimum purchase requirement of $35.

Up to 220,000 of what Walmart says are "the items most frequently purchased" are available for NextDay delivery, complementing its current grocery pickup and delivery offerings.

According to Walmart, NextDay will actually be less expensive for the company, since items will come from a single fulfillment center closest to the customer.

This means the order ships in one box, or as few as possible, and it travels a shorter distance via inexpensive ground shipping," said Mark Lore, president and CEO of Walmart ecommerce U.S. "That’s in contrast to online orders that come in multiple boxes from multiple locations, which can be quite costly."

Customers will go to Walmart.com and then shop from its NextDay delivery experience on the site.

Bentonville, Ark.-based Walmart operates more than 11,300 stores under 58 banners in 27 countries, and ecommerce websites, employing more than 2.2 million associates worldwide. The company is No. 1 on Progressive Grocer’s 2019 Super 50 list of the top grocers in the United States.