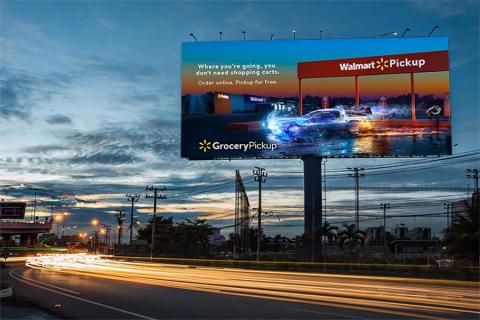 Walmart Inc. has rung in 2019 with what the mega-retailer describes as its largest and first-ever cross-platform marketing campaign for Walmart Grocery Pickup. The service is currently available nationwide and will roll out to even more locations this year.

In addition to the television component, the campaign includes additional “famous cars” content such as social media, online videos and radio.

“By sharing a consistent message across a variety of platforms, we’re confident we’ll be able to convince even more customers to give Walmart Grocery Pickup a shot,” noted Walmart U.S. Chief Marketing Officer Barbara Messing in a blog post.

Reporting on its third quarter of fiscal 2019 last November, the company said that it offered grocery pickup at nearly 2,100 locations. Last September, it celebrated its 2,000th click-and-collect location, allowing shoppers to buy groceries from their computers or mobile devices and pickup at the store for no extra charge.

According to a recent report from market research firm Packaged Facts, Walmart's loyal online grocery shoppers are 30 percent more likely than the average online grocery shopper to cite in-store pickup or curbside pickup as a major influencer when choosing where to shop among online grocers. Moreover, among respondent click-and-collect shoppers to a June 2018 survey fielded by the firm, 42 percent said Walmart was their last click-and-collect pickup location.

Bentonville, Ark.-based Walmart is No. 1 on Progressive Grocer’s 2018 Super 50 list of the top grocers in the United States.