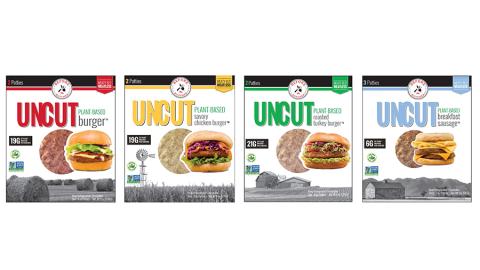 As consumer interest in plant-based alternatives to animal proteins continues to rise, Kroger banner Ralphs, based in Compton, Calif., has rolled out Uncut plant-based burger and sausage products from San Diego-based Before the Butcher at 192 stores in Southern California, marking the arrival of the Uncut brand in retail grab-and-go cases.

More than 50 additional stores will add the line by Nov.1, among them Whole Foods Market in Long Beach, Calif.; H-E-B's 10 Central Market locations in Texas; and 40 Lucky’s Markets in 10 states ranging from Colorado to Florida.

All locations will carry the full array of Uncut products, which consists of the Burger, Savory Chicken Burger, Roasted Turkey Burger and Breakfast Sausage Patty.

Some stores will also serve prepared foods made with Uncut products, including a meatless “chicken” salad. Carson, Calif.-based specialty grocer Bristol Farms was the first food retailer to feature the brand in its prepared food offering, when its Yorba Linda, Calif., store launched such items as no-meat taco mix, vegetarian meat loaf, vegetarian stuffed cabbage and meatless chorizo-stuffed potatoes in its butcher case earlier this year.

Before the Butcher noted that Uncut distribution is expected to reach more than 1,500 stores across the country by Jan. 1, 2020, which the company attributed to shoppers’ desires for plant-based products that mimic the look, cook and taste of meat, but without the adverse impacts on health, animal welfare and climate change.

According to multinational investment firm UBS, total plant-based protein sales are expected to soar from $4.6 billion in 2018 to $85 billion in 2030.

Uncut’s products are 100% plant-based, gluten-free, non-GMO, and made from a proprietary combination of non-GMO soy, refined coconut and expeller-pressed canola oils and natural seasonings. A serving contains 6 to 21 grams of plant protein and 210 to 350 milligrams of sodium.

“The plant-based meat space is exploding, and we have two key differentiators that we believe will help us quickly build market share. Offering four products enables us to appeal to different consumer tastes as well as provide menu variety, and our insistence on using non-GMO soybeans is a major plus for the growing number of consumers concerned about genetically modified foods,” said Danny O’Malley, the “presiplant” and founder of San Diego-based Before the Butcher. “These are core advantages as we enter the retail channel.”

The company is hardly alone in the meatless burger field at retail. Los Angeles-based Beyond Meat is already available at such venues as Whole Foods, Publix, Meijer and Target, while the Impossible Burger, from Redwood City, Calif.-based Impossible Foods, just made its much-hyped grocery debut at Gelson’s, Fairway Market and Wegmans Food Markets, and ShopRite revealed that it would carry Garner, N.C.-based Improved Nature’s line of all-natural meatless chicken products at hundreds of stores operating under the banner in the Northeast.

Progressive Grocer wrote up the Uncut line as a featured new product back in May.

Cincinnati-based Kroger employs nearly half a million associates who serve 9 million-plus customers daily through a seamless digital shopping experience and 2,769 retail food stores under a variety of banner names. The company is No. 2 on PG’s 2019 Super 50 list of the top grocers in the United States.