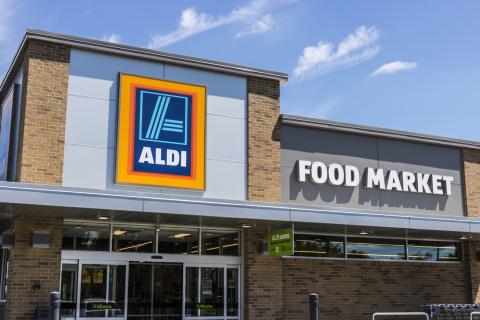 YouGov, an international data and analytics group that regularly conducts polls on a range of topics, is out with its latest list of the most popular grocers in the United States. The research firm surveyed consumers during the fourth quarter of 2022.

What does “popular” mean in this context? YouGov bases that term on the percentage of people who have a positive opinion of a grocery store.

Apparently, there’s a lot of positive sentiment around Aldi these days, as the discount grocer came in first for Q4 popularity. More than two-thirds (65%) of respondents held a positive view of the Illinois-based chain. Only 6% said they disliked Aldi.

Aldi outranked Q3 winner 7-Eleven. Aldi moved up from a second place showing during the third quarter at a time when stubbornly high food inflation is causing many shoppers to be more mindful of their grocery spend.

Trader Joe’s also edged higher from Q3 to Q4, with a 63% positive rating that made it runner-up. Here, too, just 6% hold a negative opinion of this specialty retailer.

Kroger also ranked high during Q4, the same period that the company made headlines after announcing that it was buying Albertsons Cos. Sixty-one percent of those polled thought positively of Kroger during that timeframe, holding steady from the third quarter.

The following banners rounded out the top 20 for the last quarter of the calendar year:

YouGov also broke down results by demographic. The oft-talked-about Millennial demographic placed Aldi first during Q4 and then ranked Whole Foods and Trader Joe’s as among their top three. Those in the Gen X and Baby Boomer age groups cited Trader Joe’s as the most popular, followed by Kroger and Aldi. Men also went Trader Joe’s, Aldi and Kroger for their 1-2-3, while women voted for Aldi, Trader Joe’s and Kroger.

In addition to gauging positive sentiment, YouGov asked survey participants about their familiarity with retail banners. Coming in tops for YouGov’s definition of “fame”: 7-Eleven at 97%, followed by Whole Foods Market (96%), Trader Joe’s (95%), Kroger (95%) and Aldi (91%).

With 2,200 stores across 38 states, Batavia, Ill.-based Aldi U.S. employs 45,000-plus associates and is No. 24 on The PG 100, Progressive Grocer’s 2022 list of the top food and consumables retailers in North America. Operating more than 500 stores in 40-plus states, Monrovia, Calif.-based Trader Joe’s is No. 27 on The PG 100. Serving 60 million households annually nationwide through a digital shopping experience, and almost 2,800 retail food stores under a variety of banner names, Cincinnati-based Kroger is No. 4.