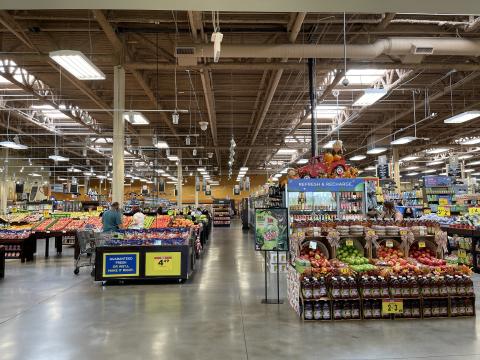 Kroger said the deal would result in a combined portfolio of approximately 34,000 total private label products across premium, natural and organic, and opening price point brands.

Kroger CEO Rodney McMullen says a merger with the Albertsons Cos. creates a national supermarket footprint of nearly 5,000 stores reaching 85 million households in 48 states that allows the combined company to create an experience for customers and associates "unlike anything else."

Kroger announced one of the biggest deals in the history of the grocery industry on Friday morning, hours after rumors began to swirl Thursday that a deal was imminent.

Kroger said it will acquire Albertsons for $34.10 a share, a total enterprise value of approximately $24.6 billion. The merger would give the companies nearly unprecedented scale and advantages to fend off competition from Walmart, Amazon and other retail giants.

The deal’s value includes the assumption of about $4.7 billion of Albertsons’ net debt. As part of the transaction, Albertsons will pay a special cash dividend of up to $4 billion to its shareholders.

In a special conference call on Friday morning with analysts and investors, McMullen said the transaction and "significant company milestone" combines two "strong diverse and resilient companies and allows us to make an important step in the journey to advance our strategy and achieve our purpose: to feed the human spirit. We are confident that our merger with Albertsons with build on our go-to-market momentum and unlock opportunities for all of our stakeholders.

"With a broader selection of fresh products and an expanded Our Brands portfolio, we will be better positioned to deliver fresher products at a great value to more customers than ever before. This is particularly important in today's inflationary environment with rising inflationary pressures and people increasingly shopping for groceries and eating at home. Our personalized portfolio along with expanded promotions and benefits will help customers save on the products they want the most and help top relieve the inflationary pressures facing shoppers across the country," McMullen continued.

Together, Albertsons Cos. and Kroger currently employ more than 710,000 associates and operate a total of 4,996 stores, 66 distribution centers, 52 manufacturing plants, 3,972 pharmacies and 2,015 fuel centers.

Both companies’ boards unanimously approved the agreement, but it will certainly be subject to rigorous regulatory approval. McMullen says he's confident the deal will pass regulatory muster.

The transaction is expected to close in early 2024, subject to the receipt of required regulatory clearance and other customary closing conditions, including receipt of clearance under the Hart-Scott-Rodino Antitrust Improvements Act of 1976. Following the close of the transaction, Rodney McMullen will continue to serve as chairman and CEO and Gary Millerchip will continue to serve as CFO of the combined company.

Many of the companies' stores operate in the same markets (in places such as California, Colorado, etc.). During the call, McMullen said Kroger plans to "maintain and enhance" both sets of the companies' distinctive banners, but that the companies expect to make store divestitures. A newly created Albertsons Cos. subsidiary (SpinCo) would be spun off to Albertsons shareholders immediately prior to merger closing and operate as a standalone public company. Kroger and Albertsons Cos. have agreed to work together to determine which stores would comprise SpinCo, as well as the pro forma capitalization of SpinCo. SpinCo is estimated to comprise between 100 and 375 stores.

In statements Friday, the National Grocers Association and the United Food and Commercial Workers International Union expressed concerns about the merger.

"A merger of the nation’s top two grocery chains should raise serious questions about a single supermarket giant gaining unprecedented dominance over the nation’s food supply chain," said Greg Ferrara, NGA president and CEO. "A merger would not only put smaller competitors at an unfair disadvantage, but also increase anticompetitive buyer power over grocery suppliers, which ultimately would harm consumers."

“The proposed merger of these two grocery giants is devastating for workers and customers alike and must be stopped. Just as our UFCW workers stood together to negotiate landmark new contracts with both Kroger and Albertsons/Safeway last year across the western U.S., we will stand united to fight for access to nutritious food, safe shopping experiences, and investments in good jobs in our communities. Essential UFCW grocery store workers emerged stronger from the COVID-19 pandemic, winning improved protections against the virus, store violence and other threats. Standing together, we know our voices are stronger than the corporations’ anti-worker rhetoric,” said Kathy Finn, UFCW 770 Acting President.

But Kroger said it plans to invest in lowering prices for customers and expects to reinvest approximately half a billion dollars of cost savings from synergies to reduce prices for customers, a huge advantage at a time when inflation shows no signs of easing.

An incremental $1.3 billion will also be invested into Albertsons Cos. stores to enhance the customer experience. Kroger will also build on its recent investments in associate wages, training and benefits. Kroger has invested an incremental $1.2 billion in associate compensation and benefits since 2018. The combined company expects to invest $1 billion to continue raising associate wages and comprehensive benefits after close.

“We have been on a transformational journey to evolve Albertsons Cos. into a modern and efficient omnichannel food and drug retailer focused on building deep and lasting relationships with our customers and communities. I am proud of what our 290,000 associates have accomplished, delivering top-tier performance while furthering our purpose to bring people together around the joys of food and to inspire well-being. Today’s announcement is a testament to their success,” said Vivek Sankaran, CEO of Albertsons Cos.

The addition of Albertsons Cos.’ portfolio expands Kroger’s core supermarket, fuel, and pharmacy businesses, bolstering the combined company’s ability to drive additional traffic into stores and digital channels. The increase in customer traffic and data will in turn power the combined company’s higher-growth, higher-margin alternative profit businesses to support continued reinvestment in the business. On a combined basis, the companies delivered approximately $210 billion in revenue, $3.3 billion in net earnings, and $11.6 billion of adjusted EBITDA in fiscal year 2021.

Kroger said merging with Albertsons Cos. offers an expanded network of stores and distribution centers, as well as a broader supplier base. Utilizing Kroger’s End-to-End Fresh initiative across a broader network will enable the combined company to optimize its supply chain to deliver the freshest products from field to table to more customers more quickly. By bringing together Kroger’s Fresh for Everyone strategy and Albertsons Cos.’ Customers for Life strategy, the combined company will expand its portfolio of fresh products, extend shelf lives and accelerate the penetration of its Fresh portfolio.

At a time when people are increasingly shopping for groceries and eating at home, Kroger said the companies will be better positioned to relieve the inflationary pressures facing shoppers with a combined portfolio of approximately 34,000 total private label products across premium, natural and organic, and opening price point brands.

With a customer base of approximately 85 million households, the combined company will have one of the most comprehensive first-party data repositories in the food and retail space and will be able to use Kroger’s data science capabilities to develop an even more compelling retail loyalty program.

Kroger said that by bringing together Kroger and Albertsons Cos.’ technology, infrastructure, and digital and delivery service providers into a single seamless ecosystem, the combined company will be able to offer customers a more personalized and convenient omnichannel experience including in-store shopping, enhanced pickup capabilities, faster delivery times, and more capabilities to serve the customer anything, anytime, anywhere with zero compromise on quality, selection and affordability.

Kroger also said the combined company will be able to reach an expanded national audience, fueling growth in alternative profit businesses such as Retail Media, Kroger Personal Finance, and Customer Insights. With an expanded footprint and the addition of the recently launched Albertsons Cos. Media Collective, Kroger will enhance its services to media clients and provide more targeted, sophisticated solutions. The combined capabilities will accelerate the growth of Kroger’s higher-margin revenue streams by extending the portfolio of solutions and accelerating their respective growth.

Koger has had a good fiscal 2022, keeping busy proving that its business model offers a way to thrive even in the face of a variety of challenging operating environments.

The grocery retail behemoth reported another set of impressive earnings on Sept. 9 despite historic inflation and some shoppers defecting from the traditional grocery channel to food discounters.

Operating profit increased 13.7% to $954 million. Kroger said adjusted earnings came in at 90 cents per share, up 12.5% from the same period last year.

Looking ahead to fiscal 2023, which ends next February, Kroger said it sees full year earnings in the range of $3.95 to $4.05 per share, a 10 cent improvement from its prior guidance in June.

"Our second quarter results provide another proof point that Kroger has the right go-to-market strategy," said Millerchip. "Our consistent execution of this strategy is building momentum in our business which, combined with sustained food at home trends, gives us the confidence to raise our full-year guidance."

Kroger said that its private brand sales were up 10.2% in the second quarter, led by record growth of its namesake Kroger brand and Home Chef brand (Kroger acquired Home Chef in 2018 for $200 million).

The retailer expanded its Our Brands portfolio with the launch of a Smart Way product line, part of Kroger's new opening price point strategy. The line brings together 16 legacy brands into a single, easy-to-find identity.

"As our customers face an ongoing inflationary environment, we know they are looking to stretch their dollars further than ever before," said Stuart Aitken, Kroger's SVP and chief merchant and marketing officer. "Smart Way is an exciting, eye-pleasing product line that will be easy for customers to find. By adding a simplified opening price point brand strategy to Our Brands portfolio, we will further cater to every customer, every time."

The company recently announced a new Kroger Delivery Customer Fulfillment Center in the Denver Metro area, one of the fastest-growing areas in the country. Kroger also opened a new Kroger Delivery Customer Fulfillment Center in Romulus, Michigan, supporting customers in several geographies, including Michigan, Northern Ohio and Indiana. And it expanded the Kroger Delivery network by opening seven new spoke facilities, which serve as last-mile cross-dock locations, including Louisville, Nashville, and Chicago in existing geographies, as well as Austin, Birmingham, Oklahoma City, and San Antonio in new geographies.

"In the first quarter, our teams continued to deliver strong operating and financial performance across all key metrics, and we continued to gain market share," said Sankaran. "As we look forward to the balance of the year, while we are thoughtful about the macro environment and the possible implications on consumer behavior, our teams have consistently demonstrated their ability to adapt to a changing back drop in real time.

“This puts us in a strong position to continue to execute against our Customers for Life strategy, including more deeply engaging our customers both digitally and in-store and delivering against our productivity agenda,” Sankaran continued. “We are so proud of the resilience, agility and passion of our teams and their ongoing service to our customers and communities."

Earlier this year, Albertsons launched a review of potential strategic alternatives to enhance its growth and stockholder value, essentially putting itself up for sale. According to its fiscal report, a third-party review into the value of its real estate portfolio shows the total value of company-owned and ground-leased properties has increased about $2.5 billion to $13.7 billion, up from $11.2 billion in 2019.