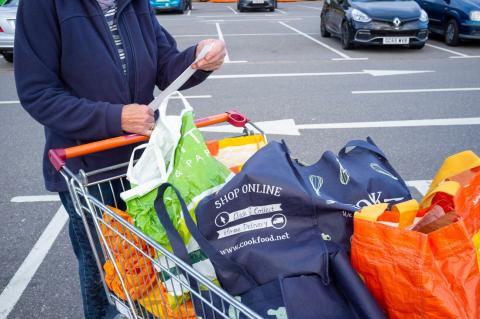 While grocery sales edged a bit higher in December, the overall retail sales picture indicates that consumers are reining in spending.

Inflation may be easing its grip, but consumers are holding tight to their wallets. The latest advance estimates from the U.S. Census Bureau show that retail and foodservice sales dipped for the second consecutive month in December.

Grocery sales were more stable, ticking up slightly from more $72.8 billion in November to more than $72.9 billion in December on an adjusted basis. Sales in this industry came in around $72.5 billion in October.

Those looking for silver linings can find one in the year-over-year (YoY) figures. Census Bureau data indicates that overall retail sales in December 2022 were 6% higher than December 2021 and total sales for 2022 were 9.2% above 2021 figures. It was also a positive year for the grocery sector, which climbed 8.3% in sales to top $848.5 billion for the 12-month period.

Still, the tepid results for December – the height of holiday shopping season – reflect consumer caution at a time when the drumbeats of inflation and a possible recession have been echoing across the marketplace. Piyush Patel, chief strategic business development officer at tech company Algolia, told Progressive Grocer that some of the YoY retail sales increases could be attributed to seasonal discounts and markdowns and said that consumer pullback will likely be evident in early 2023. “While the last couple months of 2022 were propped up by the holiday season and consumers’ fears of missing out on shopping as part of the holiday experience, we expect January to be much different,” he observed. “Consumers are expected to start tightening their budgets to recoup some of their lost savings.”

Patel offered some advice for retailers facing such shopper sentiments: “In order for retailers to increase online conversions and revenue, they’ll have to be more efficient with their resources and lean more heavily on personalization and other tactics for increasing basket sizes, rather than broad sales.”

In other economic news, the U.S. government also released fresh data on the Producer Price Index (PPI) for December. The PPI is often seen as a leading economic and inflation indicator, given that it gauges producer prices across several products and categories.

According to the U.S. Bureau of Labor Statistics, the PPI for final demand decreased 0.5% last month on a seasonally adjusted basis on the heels of slight increases in October and November. The PPI for foods was down 1.2% in December. Within that category, the indexes for canned, cooked, smoked or prepared poultry moved lower, while the indexes for beef and veal went higher.