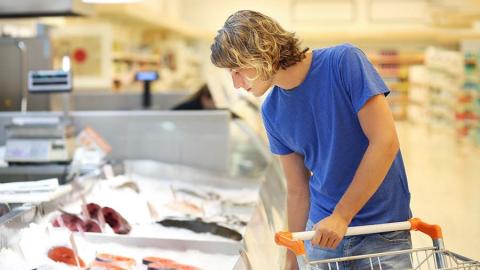 Amid worries about how ocean health affects seafood, younger consumers are more likely to find all forms of aquaculture, including cellular production, acceptable

According to recentresearch by consultancy firm Changing Tastes, most American consumers are worried about the effect of ocean health on fish and seafood, with a majority now concerned about heavy metals, plastic contamination and radiation in their fish and seafood, as well as the use of forced labor and antibiotics.

The research found that these issues are now of greater importance than overfishing, which is still a concern for more than eight out of 10 adults. Purchasing and menu decision-makers also are most worried about heavy metals and plastic contamination, along with overfishing.

Perhaps most remarkably, consumers under 55 are more likely to find farmed fish and seafood, including cellular aquaculture, to be acceptable than older Americans are, with more than half of Millennials considering all forms of aquaculture to be acceptable, among them cellular production. All generations continue to identify wild capture as the most acceptable production method, although the preference over farmed narrows among younger generations.

“We are seeing new concerns about the health of our oceans, such as plastic waste and radiation, reshaping how Americans think about eating fish and seafood as well as their openness to new ways of producing fish and seafood, including advanced aquaculture such as cellular production,” noted Arlin Wasserman, founder and managing director of Stockbridge, Mass.-based Changing Tastes. “The conventional wisdom that Americans prefer wild fish and consider it a healthier choice used to be true, and it still is among older Americans. But it’s that’s not as prevalent a belief among younger generations.”

Added Wasserman, “Having about 30% of Americans ready to replace wild fish and seafood with cellular products is a remarkable level of acceptance, especially considering the products are not yet in market.”

According to Changing Tastes, Americans born before 1964 are more apt to think of fish and seafood as heart healthy and rich in omega-3s than consumers born after 1964, and about twice as likely as those born after 1997. Only about one out of five adults, regardless of age, currently think that fish and seafood are safer to eat than other protein options or are better for the environment.

“Some of the issues on the minds of consumers are ones the seafood industry can address and remedy in part or entirely on their own, like slave labor or eliminating the use of plastic in fishing gear,” observed Jada Tullos, a seafood sustainability consultant with Changing Tastes. “But others, such as high levels of mercury in wild-caught fish, cannot be readily addressed by a single company or the fishing industry alone. Because of this, consumers are becoming increasingly concerned with wild-capture fishing compared to farmed. Ocean health indicators like mercury, plastic contamination, heavy metals and radiation are a concern for about half of seafood consumers. These concerns can be completely addressed in closed aquaculture systems, like on-shore fish farming or cellular cultivation. More traditional aquaculture production methods, like mariculture, can work to reduce exposure to contaminants through site selection.”

The research is part of the findings from Changing Tastes’ work on how Americans will eat seafood over the next five years. The look-ahead report is set to be released in mid-2020.