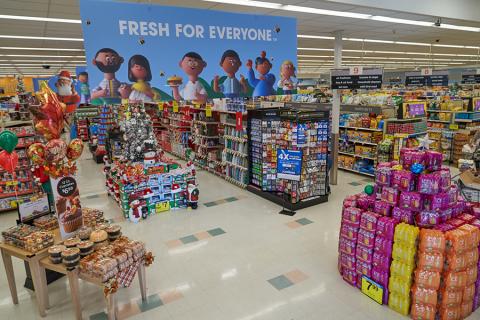 Noting that its Q3 earnings per share (EPS) and operating profit results have been affected primarily by a noncash impairment charge of $238 million related to an investment in Lucky’s Market, The Kroger Co. has decided, after a portfolio review, to divest its interest in the Boulder, Colo.-based natural food retailer. The portion of the charge attributable to Kroger is $131 million.

It’s unclear what this development means for the fortunes of Lucky’s, which in 2016 entered into an agreement under which Kroger made a “meaningful investment” in it to significantly accelerate its growth in new and existing markets. Over the past three years, Lucky's has expanded to 39 stores in 10 states, and has introduced Kroger private-brand items in its stores.

When contacted by Progressive Grocer about the divestment, a Lucky's spokeswoman responded: "This is a process that will take time as we work with the current ownership group to determine best steps for moving forward. In the meantime, we are as committed as ever to bringing more healthful foods to more people in the communities we serve. We remain committed to that mission on behalf of our team members, customers and supplier partners, and look forward to continuing to serve all of our stakeholders into the future."

Also as part of Kroger's third-quarter 2019 results for the quarter ended Nov. 9, the Cincinnati-based grocer provided a progress update on Restock Kroger, its three-year transformation plan.

“Kroger’s customer obsession and focus on operational excellence continued to generate positive results in the third quarter,” noted Rodney McMullen, the company’s chairman and CEO. “Identical sales were the strongest since we started Restock Kroger, and gross margin rate, excluding fuel and pharmacy, improved slightly in the quarter. At the same time, we continued to reduce costs as a percentage of sales.”

Added McMullen: “We are using the power of Kroger's stable and growing supermarket business to create meaningful incremental operating profit through the alternative profit stream businesses, which adds up to a business built for long-term growth that generates consistently attractive total shareholder returns. Kroger continues to generate strong and durable free cash flow, as reflected by the fact that the company has reduced debt by $1.5 billion over the prior four quarters and continues to increase its dividend to create shareholder value.”

According to the executive, “Restock Kroger is the right framework to reposition our business to create value for all of our stakeholders, both today and in the future.”

The company saw identical-sales growth without fuel of 2.5% during Q3, marking its strongest quarter since the launch of Restock Kroger. According to the grocer, several supermarket departments outperformed the company during the quarter, among them produce, key beverage categories, pharmacy and natural foods. McMullen said that Kroger was growing its supermarket business by focusing on three levers to drive identical sales: fresh, private brands, and personalization as exemplified by the grocer's successful fuel points program.

LIFO charge for the quarter was $23 million, compared with $12 million in the year-ago period, which Kroger attributed to higher inflation in dry grocery, pharmacy and dairy.

As a result of being within its targeted debt range, the grocer plans to initiate share repurchases in the fourth quarter under its $1 billion board authorization.

The company also noted its many Q3 highlights, including the launch of its new logo and Fresh for Everyone brand transformation effort; the 3.4% increase in own-brands sales from the prior year; the introduction of more than 200 private-brand items; its expansion to 1,915 Pickup locations and 2,326 Delivery locations, covering over 96% of Kroger households, as well as the launch of the fully seamless Ship offering; the announcement of an additional Kroger-Ocado customer fulfillment center, in Wisconsin; a partnership with Europe's Infarm to introduce the first U.S. in-store living-produce farms in Seattle-area QFC stores; an average hourly rate for Kroger associates of more than $20, with comprehensive benefits factored in; six emerging Kroger leaders named 2019 GenNext Award winners by PG; and its decision to stop selling e-cigarette products.

Kroger employs nearly half a million associates who serve more than 11 million customers daily through a seamless shopping experience under a variety of banner names. The company is No. 2 on PG’s 2019 Super 50 list of the top grocers in the United States.