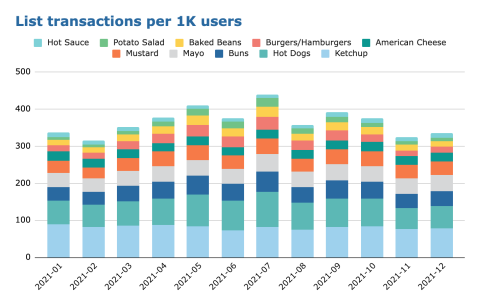 As retailers and CPGs get ready to light it up for grilling season, they can glean some insights from AdAdapted’s data on mobile shopping results from last year and their projections for the upcoming peak sales period for grilling staples and supplies. The shopping list marketing and insights platform is out with a new report on grilling.

According to AdAdapted’s analysis, shoppers start to buy items for grilling in late May, before Memorial Day, and purchases reach a pinnacle in advance of Independence Day in July. Some popular grilling items, like mustard and mayonnaise, get an early bump from the Easter holiday.

As for what consumers are putting on lists to then put on their grills, AdAdapted reports that perennially-favorite proteins like hamburgers and hot dogs are still seasonal staples for outdoor cooking. The firm’s data found that hot dogs had a noticeable peak in list additions during the first few months of the pandemic when families and kids were largely at home before dipping a bit in summer 2021; currently, hot dog transactions are getting back to pre-pandemic levels. There’s a definite bell curve for burgers, which peak in July, but data also revealed that burgers spent eight out of 12 months at add-to levels higher than 2019.

Meanwhile, meat alternatives show some popularity during the summer but list additions are lower compared to the early months of the year, a trend that AdAdapted attributed to diet and healthy eating resolutions following the holidays. Within the alt-meat category, Beyond Meat is edging out competing brand Impossible on mobile shopping lists, the company’s data showed. Meat alternatives are most popular on the East and West coast.

Not surprisingly, as they build their grilling shopping lists, consumers add traditional items to pair with grilled meats and meat alternatives. In the condiment category, the biggest player is ketchup, followed by ranch, mayo, mustard and barbecue sauce. Miracle Whip led the condiment brands, while others cracking the top five include Frank’s Red Hot, Kraft, Tabasco and Hellmann’s.

As for breads, hamburger buns are at the top of shoppers’ lists, with hot dog buns coming in second. Brioche buns have become more popular, now ranking fourth in the type of bread used with grilled meats or meat alternative, the firm reported.

Beyond the handhelds, AdAdapted affirmed other items that typically go on lists during grilling season, including accompaniments like fries, potato salad, baked beans, barbecue sauce, chips, marshmallows and pop.

On a broader level, grilling continues to be a popular pastime among consumers, even as restaurants have opened up with the easing of the pandemic, other industry research shows. In a report released earlier this year, The NPD Group reported that sales of grills and grilling accessories increased over the past two years, and grilling-related revenue rose 14% last year to reach $6.1 billion in sales.