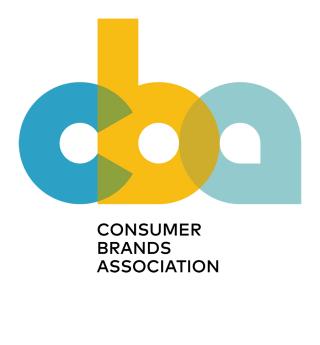 It's official: The Grocery Manufacturers Association is now the Consumer Brands Association, with such changes as a brand-new logo

“The Consumer Brands Association is an entirely new organization with a focused, compelling agenda that establishes the industry as a champion of the billions of consumers it serves daily,” said Geoff Freeman, president and CEO of the Arlington, Va.-based association. “We are on the path to providing the CPG industry with a platform and results unlike anything it has previously experienced.”

“Today’s business and policy environment requires a strong, strategically aligned industry organization guided by a consumer-first mindset,” added Jeff Harmening, chairman of the board and CEO, General Mills, and CBA chairman. “Our industry has evolved considerably in recent years and the Consumer Brands Association will be a vital reflection of our united interests and alignment with today’s consumer.”

Those interests were reflected in the results of an inaugural survey of industry executives. According to “Industry View 2020,” the vast majority (86%) of CPG executives identified consumer expectations as the most influential factor influencing industry decision-making and long-term success. CPG leaders also cited an inconsistent regulatory environment created by state-by-state policies as their biggest concern — ranking “complying with patchwork state regulations” as the top issue affecting their business this year. The survey also revealed rising concerns among CPG leaders in regard to transportation costs and growing investment in, and prioritization of, sustainability, echoing CBA’s new agenda.

The CPG industry supports one in 10 U.S. workers -- that’s 20.4 million jobs -- and is the largest manufacturing employer in the nation, generating $1.1 trillion in labor income and contributing $2 trillion to the nation’s GDP. New research also found that the industry is a perennial presence in people’s lives, with the average American using 42 CPG products daily.

“Few industries impact every household across the country,” observed Freeman. “It’s our job to harness that reach to drive positive change — both for our members and for the millions of American families they serve every day.”