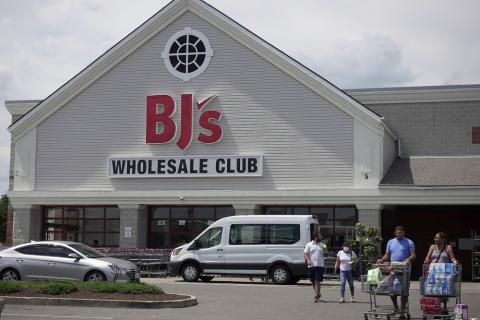 Consumers looking to buy in bulk to save on high-priced groceries have helped BJ’s Wholesale Club realize impressive gains in traffic and market share during its second quarter ended July 30.

“Our business model is designed to work well in the current consumer environment, where value is king, and we believe we are well positioned for growth by doing what we do best – delivering great value to our members,” said BJ’s President and CEO Bob Eddy.

Online was another shining area for second quarter. The company reported that digitally enabled sales growth was 47.0% year over year.

Gross profit increased to $860.0 million in the second quarter, from $763.5 million last year during same period. The company's merchandise gross margin rate, which excludes gasoline sales and membership fee income, decreased 50 basis points over the second quarter of fiscal 2021. Merchandise margins were affected by increased freight costs as well as investments in inflationary categories and markdowns in general merchandise inventory.

Markdowns included BJ’s WOW Days in July, its biggest event of the summer. Available in-club and online, the three-day event allowed members to find savings of up to 40% off hundreds of items across the home, consumer electronics, and health and beauty categories.

Eddy noted that the company continues to deliver tremendous value across virtually every aspect of its business. “Our relentless focus on investing in our long-term initiatives has put us in a place to capitalize on current trends and deliver this strong performance,” he said. “Our member base is growing in both quality and size. We are improving our merchandising to offer more value. We are growing our digital business, offering more convenience and optionality for our members. We are expanding our footprint into new and existing markets with success.”

Expansion plans remain on track for the company, with 11 new club openings expected in fiscal year 2022. In June, BJ’s revealed the next phase of its 2022 development plans, which included the opening of four new clubs in Noblesville, Ind.; New Albany, Ohio; Wayne, N.J.; and Midlothian, Va. The Noblesville club will be the first club for the retailer in the state of Indiana.

Meanwhile, selling, general and administrative expenses (SG&A) increased to $651.2 million in the second quarter of fiscal 2022, compared with last year’s $598.1 million. The increase was primarily driven by increased labor costs as a result of last year’s wage investments, as well as the acquisition, integration and operating expenses related to the acquisition of assets from Burris Logistics. On May 2, BJ’s completed its acquisition of four distribution centers and a related private transportation fleet from Milford, Del.-based Burris, bringing its end-to-end perishable supply chain in-house.

Under its existing share repurchase program, the company repurchased 353,000 shares of common stock, totaling $22.8 million in the second quarter of fiscal 2022.

Westborough, Mass.-based BJ's operates 229 membership warehouse clubs and 160 BJ’s Gas locations in 17 states. The company’s common stock is traded on the New York Stock Exchange. BJ’s is No. 26 on The PG 100, Progressive Grocer’s 2022 list of the top food and consumables retailers in North America.