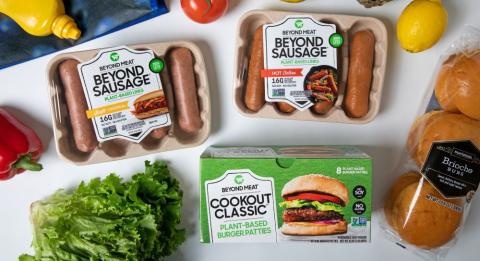 Kroger, Wegmans, Sprouts, Target and other retailers are adding additional Beyond Meat products to store shelves.

“Last year, we expanded our retail portfolio by introducing six new product SKUs,” said Chuck Muth, chief growth officer at El Segundo, California-based Beyond Meat. “In tandem, we’ve been able to work with major retailers across the country to expand our in-store presence to offer more Beyond Meat products in more stores to advance our unwavering commitment towards making plant-based meat options that are better for people and the planet more accessible to all.”

The plant-based company also has its eye on creating new snack and beverage options. In January, it formed a joint venture with Purchase, New York-based PepsiCo. The companies are forming The PLANeT Partnership to develop, produce and market snack and beverage products made from plant-based protein.For Beyond Meat, the venture allows the company to expand its product lines and sell even more product in the grocery sector.

Beyond Meat revealed its expanded distribution a few days after competitor Impossible Foods launched its first national advertising campaign, “We Are Meat.” Additionally, Impossible Foods said in February that after achieving cost savings, it was cutting retail prices by 20% throughout the United States.

Meanwhile, Beyond Meat reported its fourth-quarter 2020 financial results in February. Net revenues were $101.9 million, an increase of 3.5% year over year. Gross profit was $25.4 million, or gross margin of 24.9% of net revenues.