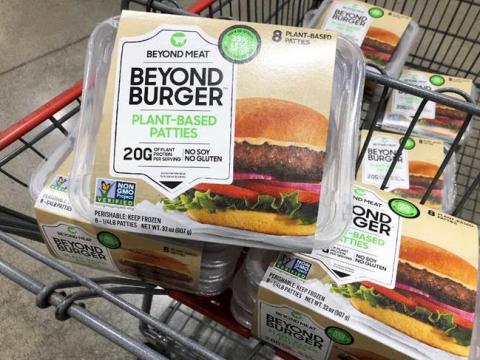 Beyond Meat has designed a product package for club food retailers.

Beyond Meat is finding more room on food retail shelves as it also launches its first TV commercial.

BJ’s Wholesale and Sam’s Club will carry the plant-based meat alternative in eight packs of its Beyond Burger flagship product — packs especially designed for club stores, Beyond Meat said Monday. The product began to appear at Costco stores last year.

“Having entered all national conventional retailers in the U.S., we looked for where the white space existed and club stores were the next logical step towards increasing accessibility to plant-based meat among mainstream consumers,” said Chuck Muth, chief growth officer, Beyond Meat. “By offering the Beyond Burger in a larger format, we’re able to provide value to consumers and a more accessible entry point for those looking to try a plant-based option for the first time or increase their adoption of plant-based meat. With the added focus on retail the past few months as well as a shift towards less frequent, stock-up style shopping trips, our distribution in club stores has been especially critical.”

Beyond Meat hopes to gain new ground via a TV ad commercial that debuts tonight during a during the Lakers vs. Jazz NBA game on Spectrum Sportsnet.

The spot features Beyond Meat ambassador Octavia Spencer, a star of the movie “Hidden Figures.” In the ad she asks audiences to consider a future of food that’s better for people, animals and the planet – then reveals that it is already happening, as consumers have already started embracing plant-based protein as part of their everyday lives. The commercial also includes athletes who have a plant-based diet.

“We are launching this movement to invite everyone to join us in a journey of creating the future of food. We want to show people how small actions collectively can make a big impact,” said Stuart Kronauge, chief marketing officer for Beyond Meat. “We have a vision of a future where we can continue to eat what we love through the creation of delicious, nutritious options without the use of GMOs or synthetic ingredients.”