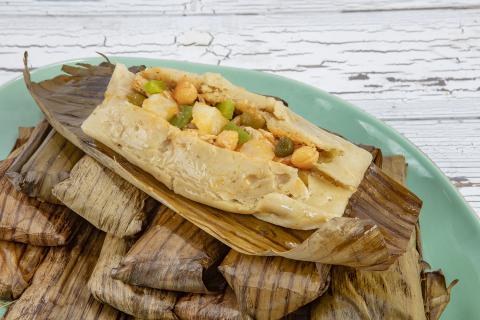 Capitalizing on the fact that tamales are a perennial dish at Hispanic holiday gatherings, Vallarta Supermarkets has introduced Central American tamales at the La Cocina section of its stores.

New this year, Hispanic grocer Vallarta Supermarkets is billing itself as only grocer offering Central American tamales available in stores at its La Cocina (Mexican kitchen) section, as of Nov. 16. The move is part ofVallarta's ongoing mission to provide a range of foods and brands from Mexico and Central and Latin America, including expanded holiday offerings.

“Together with our culinary team, we’ve developed a special tamal for those yearning for the authentic taste of Central America,” noted Rick Alejo, Vallarta’s Central and South American foods buyer. “We are always expanding our offerings to provide customers the traditional foods they miss from home. We have been working on perfecting this tamal for many months and know our customers will appreciate the authentic taste of Central American tamales that are conveniently accessible at our stores this holiday season.”

The grocer also offers exclusive seasonal masa flavors made fresh daily, among them strawberry, pineapple, and chile. Its prepared masa is ready for tamal making or masa fina, which is used for making tortillas or champurrado, a traditional chocolaty cold-weather drink.

Recently, the grocer, which has added such items to its menu as meatless offerings made with Beyond Meat, made its prepared foods available via Postmates.