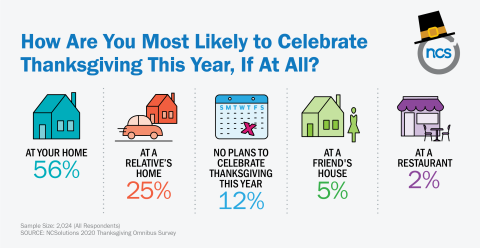 Despite the pandemic, most Americans still plan to celebrate Thanksgiving, with most saying they'll do so at home. Source: NCSolutions

Eighty-three percent of Americans surveyed said that they view Thanksgiving 2020 as equally or more important than last year, and more than half (56%) said that they’ll celebrate at home.

Meanwhile, a large majority plan to shop in-store at their favorite supermarket to prepare for the holiday. These findings come from an online survey commissioned by NCSolutions (NCS), a New York- based media firm that helps CPG companies improve their advertising. The survey was conducted in mid-October and includes 2,024 respondents.

Some Thanksgiving tables will be set for slightly smaller crowds, with 31% of Americans
indicating that they’ll have somewhat fewer or many fewer people at the meal this year. Still, 59% are planning for the same number of guests at their table. Only 10% said that their gatherings will be larger than last year. Meanwhile, 2020 Thanksgiving celebrations will largely take place indoors, as 90% of Americans said that they plan to eat inside. In addition, 61% of people said that they’ll give thanks this year with people who don’t live in their household.

Sixty-one percent indicated that they would celebrate with people who don’t live with them, while 39% said that their holiday meal would only be with household members. A third of consumers (34%) expect four to six people at their celebrations, and 24% said that their gatherings would include just two to three people. Only 12% said they expected a larger crowd of 10-12.

“The big takeaway for CPG advertisers is that Thanksgiving isn’t canceled," said Linda Dupree,CEO of NCSolutions. "Holidays are holidays even as the pandemic continues. As we’ve seen during this pandemic around other holidays, spending has increased, since celebrations represent a bit of normalcy and remain important to consumers."

Dupree also noted: “Historically, our data shows a 7% increase in household grocery spending in the weeks prior to Thanksgiving. We are currently observing household spending on groceries to be up 24% compared to the same time last year. While the COVID-19 pandemic has been a great disruptor for many things, all indicators point to Thanksgiving 2020 being an important facet of the fabric of American family.” 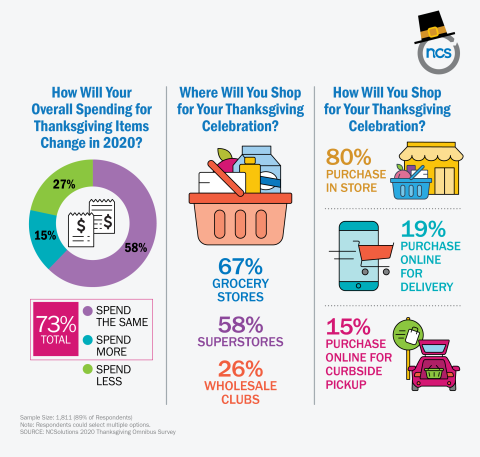 Most consumers surveyed said that they would spend the same or more on Thanksgiving items. Source: NCSolutions

Consumers selecting multiple responses indicated more than two-thirds (67%) will shop for
their Thanksgiving table at grocery stores; a similar but slightly smaller number (58%) will shop at superstores; and a little more than a quarter (26%) at wholesale club stores.

In other good news for retailers and consumer packaged goods companies, shoppers
indicated that their overall Thanksgiving spending in 2020 would be about the same as in 2019.

“With more Americans putting greater emphasis on Thanksgiving, the combination of the same number or fewer guests and holiday spending the same or growing should translate to an increased number of smaller gatherings and more shopping," said Lance Brothers, chief revenue officer at NCSolutions.

The survey also asked consumers to weigh in on their favorite – and least favorite –
Thanksgiving dishes. A full 70% rated turkey No. 1. As for least favorite, Brussels sprouts was the winner, with 42% voting it as their must-avoid food item.

In terms of which media they would turn to for Thanksgiving cooking ideas and related advice, a category where consumers could select as many responses as they wished, the top five responses were "go it on their own" (41%), cooking websites (33%), social media (26%), how-to videos (20%) and TV (18%).