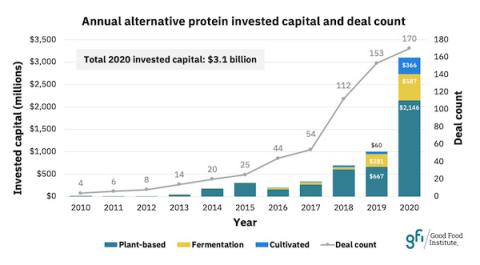 GFI's chart shows the sharp increase in invested capital and deal count for the alternative-protein sector in 2020.

According to new data from The Good Food Institute (GFI), 2020 was a record period of investment in companies offering sustainable alternatives to conventional animal-based foods, among them global plant-based meat, egg and dairy companies; cultivated-meat companies; and fermentation companies dedicated to alternative proteins. Occurring in tandem with the social, environmental and economic crises of last year, the increase also indicates a rising interest in climate-friendly investments with returns beyond the bottom line.

Conducted using the PitchBook Data platform, GFI’s analysis of investment activity within these industries found that global alternative protein companies received $3.1 billion in disclosed investments in 2020 — more than three times as much as the $1 billion raised in 2019 and four and a half times as much as the $694 million raised in 2018. Alternative-protein companies have raised nearly $6 billion in invested capital in the past decade (2010–20), more than half of which was raised in 2020 alone:

“The investor community is waking up to the massive social and economic potential of food technology to radically remake our food system,” Sharyn Murray, senior investor engagement specialist at Washington, D.C.-based GFI, a nonprofit working internationally to make alternative proteins delicious, affordable and accessible, funded entirely by private philanthropic support. “Early trendsetters like Impossible Foods, Beyond Meat, Memphis Meats and Mosa Meat continue to perform well, and there are more and more entrepreneurs who see the potential of alternative proteins to succeed in the marketplace while having a positive global impact on food sustainability and global health.”

“2020 was a breakout year for alternative proteins, with record investment flowing into all segments of the industry,” added Caroline Bushnell, GFI’s director of corporate engagement. “This is yet another signal of the significant potential the private sector sees in this rapidly growing global industry. While the amount is record-breaking, more investment is needed — from both the public and the private sectors — to meet the urgency of this moment. A large-scale shift toward alternative proteins will be critical to mitigating the environmental impact of food production, meeting the Paris Climate Agreement, and sustainably feeding a growing global population.”

GFI’s “State of the Industry” reports, due out in May, will offer deeper insights on the state of alternative proteins.