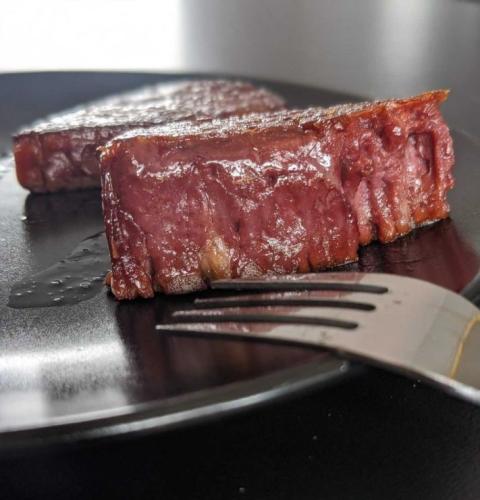 Redefine Meat has completed a $29 million A-series funding round with aims of becoming the world’s biggest alternative-meat company by 2030. The investment will be used to expand the company’s meat portfolio and support its commercial launch and international growth in 2021, on the back of the slated completion of a large-scale production facility for its industrial 3D Alt-Meat printers set for later this year.

3D printing is revolutionizing 21st-century production for a variety of products, including shoes, airplane and car parts, medical devices — and even food.

“We want to change the belief that delicious meat can only come from animals, and we have all the building blocks in place to make this a reality: high-quality meat products, strategic partnerships with stakeholders across the world, a large-scale pilot line under construction, and the first-ever industrial 3D Alt-Meat printers set to be deployed within meat distributors later this year,” said Eshchar Ben-Shitrit, CEO and co-founder of Israel-based Redefine Meat.

Last month, Redefine Meat revealed its first strategic agreement with premium-quality Israeli meat distributor Best Meister, following the success of the largest blind tasting of alternative meat co-organized by the two companies, which demonstrated a 90% acceptance rate among meat eaters. As part of their partnership, Best Meister will distribute the company's Alt-Meat products commercially to Israeli restaurants and high-end butchers in the first half of 2021.

Redefine Meat's latest financing round was led by Happiness Capital and Hanaco Ventures. They are joined by CPT Capital, an alternative-protein investor and early supporter of Redefine Meat, as well as other new international investors, including Losa Group, Sake Bosch and K3 Ventures.

“We are thrilled to have concluded this round of funding with such a unique and diverse group of highly experienced, professional investors who share our vision,” said Ben-Shitrit. “This funding, which was concluded faster and better than we could have imagined a year ago, is a major step towards becoming the world’s biggest alternative-meat company by 2030.”

“We look to find disruptive technology and ambitious leadership teams in industries that can bring real happiness to people and make the world a better place,” said Eric Ng, CEO of Hong Kong-based Happiness Capital. “The fast-growing alternative-meat sector is one such industry, but there is currently a gap in its ability to meet the needs of people who still want to eat traditional meat. Redefine Meat offers a unique solution that appeals to meat eaters with tasty and sustainable food. With technology that is ready for production, and strong strategic partners, Redefine Meat is poised to deliver high-quality meat alternatives that can make a meaningful impact on global meat consumption.”

“Hanaco Ventures has been an investor in Redefine Meat since its seed round in 2019,” noted Pasha Romanovski, founding partner of Hanaco Ventures, which is based in New York and Tel Aviv. “The speed at which the company has progressed has been incredible. We have been very fortunate to work closely with Redefine Meat during 2020 and have watched the company rapidly grow from eight people to more than 40, despite the challenges of COVID-19.”

The popularity of alternative-meat solutions and plant-based products has exploded during the pandemic.

Los Angeles-based Outstanding Foods is also gaining recognition, having raised $10 million in its latest financing round to grow its plant-based snack portfolio. Outstanding Foods plans to expand both its retail footprint as well as its direct-to-consumer marketing efforts in support of its first product, PigOut Pigless Pork Rinds, and its most recent launch, Addictively Delicious TakeOut Meal-In-A-Bag Puffs.

Founded in 2018, Redefine Meat has developed patent-pending technology that replicates the texture, flavor and eating experience of beef and other high-value meat products. The company uses plant-based ingredients and technology as opposed to animals, which it says allows for a more efficient and sustainable way to produce meat without compromising on the experience. According to the company, Redefine Meat's Alt-Meat is 95% more sustainable, significantly healthier and costs less than beef.

Seattle-based Amazon is No. 1 on The PG 100 list, Progressive Grocer’s 2020 list of the top food and consumables retailers in North America, while its Austin, Texas-based Whole Foods Market banner is No. 24.