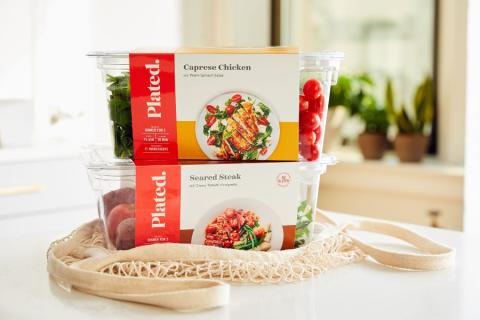 The Albertsons Cos. is expanding in-store availability of its Plated meal kits to nearly 80 more stores at opposite corners of the country.

Already available in the Chicago, San Francisco, Texas, Southern California and Intermountain markets, the kits are arriving in 37 stores in the Northeast and 42 locations in the Southwest. The Albertsons and Safeway banner stores involved in the expansion will carry varieties curated by Plated’s Le Cordon Bleu-trained head chef, Elana Karp, including:

Albertsons purchased Plated just more than a year ago, the first major grocer to pick up a major meal-kit brand. This April, the grocer revealed its plans to expand the kits' availability beyond its grocery ecommerce platform and a 40-store pilot in two markets to hundreds of stores nationwide under various banners by the end of the year. This latest expansion is part of that initiative.

The news marks the second major announcement this month of a major grocer's expansion of meal kits through its physical operations. A couple of weeks ago, the Kroger Co. began rolling out its Home Chef meal kits and debuted Home Chef Express, a line extension of quick-cook meal kits, in a limited market test. The Home Chef kits debuted at select Mariano's stores in Illinois and select Metro Market and Pick 'n Save stores in Wisconsin, while the Home Chef Express kits launched at select Kroger stores in Kentucky and Michigan. Both lines are available in Cincinnati Kroger stores, and will expand to new markets in 2019.

Boise, Idaho-based Albertsons Cos. operates stores across 35 states and the District of Columbia under 20 well-known banners, including Albertsons, Safeway, Vons, Jewel-Osco, Shaw’s, Acme, Tom Thumb, Randalls, United Supermarkets, Pavilions, Star Market, Haggen and Carrs, as well as meal-kit company Plated. The company is No. 3 on Progressive Grocer's 2018 Super 50 list of the top grocers in the United States.