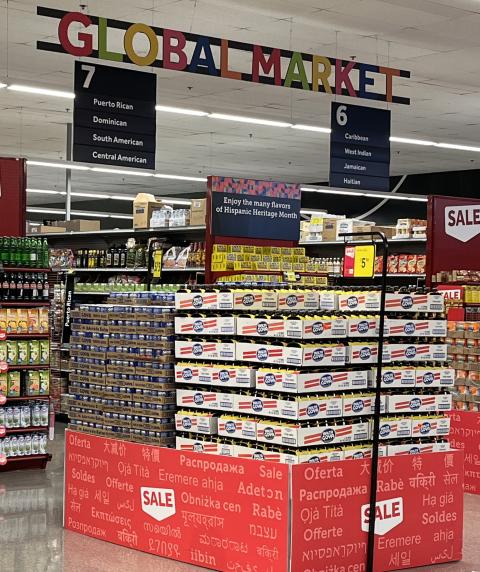 The Global Market at the renovated Stop & Shop store at the Mall at Bay Plaza shopping complex in The Bronx, N.Y., with sale products in the foreground.

As Ahold Delhaize finally rolls out store renovations for its New York metro-area Stop & Shop stores, after logistical delays exacerbated by the pandemic, the company was proud to show off its recently remodeled location at the Mall at Bay Plaza shopping complex in The Bronx, N.Y.  In fact, the retail conglomerate provided an extensive store tour led by store manager Chris Liberatore, with journalists from Belgium and the Netherlands (as well as Progressive Grocer) and top brass from the c-suite – notably Ahold Delhaize CEO Frans Muller and its CFO, Natalie Knight – in tow. The day also included a tour of FreshDirect’s main facility, also in The Bronx, capped off by an elegant dinner showcasing a range of the e-grocer’s offerings.

Along with refreshed store signage and décor, and new sections carved out in the expanded space, a key aspect of the Bay Plaza Stop & Shop’s makeover was to provide a “meaningful assortment” for the surrounding neighborhood’s extremely varied demographics, which include West Indian, Puerto Rican, Dominican, Middle Eastern and West African consumers. After performing careful market research on the community’s makeup, Ahold Delhaize teamed up with local distributors that would normally work with bodegas – corner stores primarily catering to Caribbean Hispanic customers, although they also carry convenience items for a more general shopper – to provide a taste of home for Stop & Shop customers. The goal? A one-stop shop.

To achieve this, Ahold Delhaize removed certain SKUs that weren’t selling and brought in 1,500 new ethnic products, including Spur Tree canned ackee from Jamaica and Oh Shito! sauce from West Africa, as part of a Global Market grocery section organized by national origin, with competitive pricing in line with that of the market. In another clever touch, the aisle signs feature pictures of the featured items for the benefit of customers who don’t speak English.

As shoppers enter the store, however, they’re met with a mass display area featuring sales items, most of them popular ethnic brands. The SKUs are piled stacked high to evoke the familiar look of a bodega and entice customers to buy the discounted products.

These brands are so important to shoppers at the Bay Plaza store, that many will purchase as many as 20-30 units of a given item. Additionally, small businesses in the area often stock up on such products as rice, so the store stocks much larger bags than are usually seen on supermarket shelves.

Marwan Fakhouri, SVP of merchandising services at Stop & Shop, explained that the banner is able to custom-tailor the mix of each store to the demographics of its market. Three years ago, Fakhouri’s team embarked on a project in which they built clusters – small, medium and large – and then created planograms for each of those clusters. Stop & Shop is now deploying those planograms where they make sense. Based on consumer feedback, which often comes directly to the store manager, locations can adjust assortments.

Beyond center store, the rest of the store reflects the preferences of the neighborhood’s shoppers. The produce section boasts an expanded tropical offering, with big sellers including cut calabasa (squash) and water coconut, the latter of which, as Produce Manager Willy Rodriguez soon discovered, is used by locals to create a disgestive tonic for the elderly as well as an oatmeal-like preparation for them.

Similarly, the meat department features offal, including oxtail, which is considered a delicacy by many of the store’s shoppers, and expanded Halal items, while the seafood department offers whole fish displayed on ice, in keeping with customer preference. In the refrigerated section, the yogurt set was reduced to make room for more multicultural-driven products like flavored juices with a tropical twist – “the sweeter the better” noted Liberatore – and easy-to-find ethnic meats.

The store additionally sells huge barrels that customers use to ship commodities to relatives in their home countries.

Since its debut in June, the renovated store has racked up double-digit sales gains and is above plan in comparative-sales growth and profitability, according to Ahold Delhaize. Other New York City Stop & Shop remodels are rolling out in Brooklyn’s Sheepshead Bay neighborhood and Queens’ Maspeth community, each also tailored to those areas’ distinct demographics.