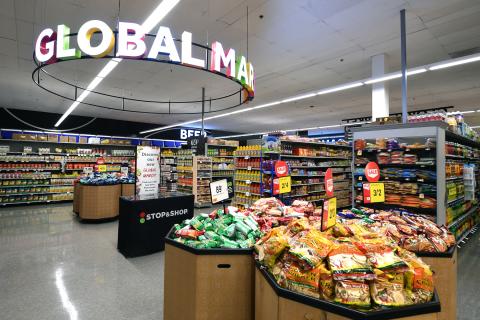 Stop & Shop plans store upgrades across New York’s five boroughs over the next two years; its Bay Plaza location in The Bronx is the first to be remodeled. Photos courtesy of Marc Levine.

As part of Stop & Shop’s investment of more than $140 million in its New York metro-area stores, the banner celebrated the grand reopening of its Bay Plaza store in The Bronx with a June 10 ribbon-cutting ceremony.

The Bay Plaza store was the first to be remodeled, with additional store upgrades across New York’s five boroughs taking place over the next two years. The upgrades come with the addition of thousands of new items as a way to improve the shopping experience for local customers, as well as the rollout of the Flashfood program, which offers fresh food items at up to 50% off. Flashfood also recently teamed with Latino-owned supermarket chain Vallarta Supermarket to pilot the food waste-fighting app in five Los Angeles County stores, expanding Flashfood's presence across the United States from coast to coast.

“We’re proud to make such a significant investment in New York City, and we’re excited to show customers that we can be the one-stop shop for everything they need and that we’re delivering great value, particularly in this current economic environment,” said Gordon Reid, president of Quincy, Mass.-based Stop & Shop.

The Bay Plaza store features a new Global Market with authentic products from 14 regions, carrying hundreds of items locally made in the New York metro area, including West African-style Fonio Chips from Yolélé, and Mike’s Amazing vegetable oils and mayonnaise.

The Global Market also offers a wide array of West Indian and Caribbean products, among them items specific to Puerto Rico, the Dominican Republic and Jamaica, along with Halal meat, dairy and grocery products.

“We’re also committed to fighting hunger in the boroughs and as part of our $1 million commitment, we’re investing nearly half a million in the city’s public schools and colleges to ensure local students have consistent access to healthy food so they can succeed in the classroom and beyond,” noted Reid.

A longtime partner of Food Bank for New York City, Stop & Shop will once again sponsor the food bank’s Mobile Pantry – an eight-week distribution of fresh produce and pantry staples – that will kick off in the Queens community of Ozone Park on June 24.

Stop & Shop’s significant investment in the community also includes the launch of a new food security initiative in partnership with Montefiore Hospital and Quincy Asian Resources, which is set to begin in the South Bronx and will significantly expand the Stop & Shop School Food Pantry Program in the city’s boroughs.

The program was established to help limit barriers affecting students’ ability to succeed in the classroom by making sure that they have consistent access to food. By next year, Stop & Shop will support more than 30 in-school pantries across New York City.