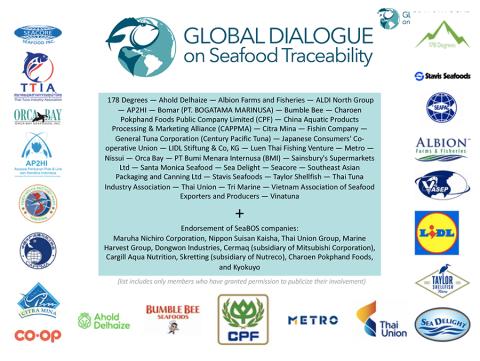 The Seafood Business for Ocean Stewardship (SeaBOS) and the Global Dialogue on Seafood Traceability (GDST) are teaming up on a joint initiative in which more than 60 major seafood companies and retailers such as Aldi and Lidl will work together toward the adoption of worldwide industry standards to improve the quality, efficiency and affordability of seafood traceability. The news came during Seafood Expo North America (SENA) 2019.

Whilereliable, affordable traceability is a top priority for the seafood industry, the lack of global standards has been a longstanding problem, the entities admitted.

“These unprecedented pre-competitive voluntary standards will equip the seafood sector for the 21st century’s globalized, information-based economy, and will help make digital seafood traceability a universal industry practice,” SeaBOS and GDST noted in a joint statement, adding that “a set of voluntary industry norms” are necessary “to eliminate costly and unnecessary barriers between the dozens of incompatible, proprietary traceability systems that exist today, and to help guide governments towards the harmonization of standards affecting seafood trade.”

Together, the SeaBOS and GDST initiatives currently represent more than five dozen companies across the global seafood supply chain. Besides Ahold Delhaize – whose American division, Ahold Delhaize USA, is No. 4 on Progressive Grocer’s 2018 Super 50 list of the top grocers in the United States – Aldi, No. 9 on PG’s list; and Lidl, which, after a shaky start, is steadily growing its Stateside presence, participants in the joint initiative include European food retailer Metro, U.K. grocer Sainsbury’s, Anova Food USA, Bumble Bee Foods, Cargill Aqua Nutrition, Stavis Seafood and Thai Union (Chicken of the Sea International). A panel featuring GDST, Bumble Bee, Thai Union, Anova Food USA, and Albion Farms and Fisheries discussing the new standards, anticipated benefits and effects their own companies and the industry as a whole will take place on Monday, March 18 during the expo.

SeaBOS was formed in December 2016 under the auspices of the Keystone Dialogues to bring together the world’s largest and most influential seafood companies to help lead a global transformation toward sustainable seafood production and a healthy ocean.

The GDST launched in April 2017 as a broadly representative business-to-business forum charged with developing global voluntary seafood traceability standards and guidelines.  The GDST’s output is scheduled for publication late this year or early next year.