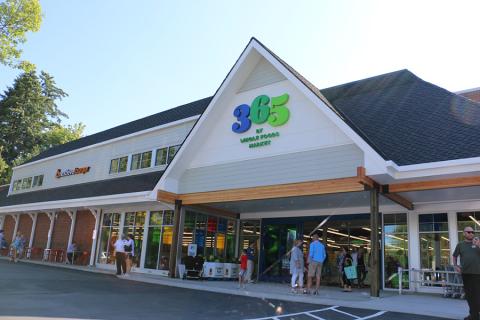 A 365 by Whole Foods Market store in Lake Oswego, Ore.

Whole Foods Market will no longer open new stores under its 365 by Whole Foods Market banner, the smaller-format, value-focused concept it launched less than three years ago, according to published reports citing an internal communication by company CEO John Mackey.

“As we have been consistently lowering prices in our core Whole Foods Market stores over the past year, the price distinction between the two brands has become less relevant,” Whole Foods CEO John Mackey explained in an email quoted by Yahoo Finance and Business Insider. “As the company continues to focus on lowering prices over time, we believe that the price gap will further diminish.”

The 12 365 stores currently in operation will remain so, Mackey added.

The first 365 locations opened May 2016. After Seattle-based Amazon acquired Whole Foods in 2017, however, the grocer cut prices in its namesake stores and rolled out discounts for Amazon Prime members.

In his email, Mackey noted that the 365 banner “has developed innovations and efficiencies across purchasing and operations that have, and will continue to, make Whole Foods better. Auto replenishment, digital shelf tags, labor scheduling and ‘Friends’ partnerships with outside companies are just a handful of examples of best practices that have come from the 365 team.”

Jeff Turnas, who led 365 operations, will work to transition them to their respective regions and continue to guide special projects, including the development of new store formats, before taking on a new position within the company. For his part, Mackey pledged in his email that Whole Foods would “continue to innovate and experiment with new store concepts and designs that will allow us to offer customers unique and differentiated experiences that play to the strengths of the company.”

Under its parent company, Amazon, Austin, Texas-based Whole Foods is No. 8 on Progressive Grocer’s 2018 Super 50 list of the top grocers in the United States.