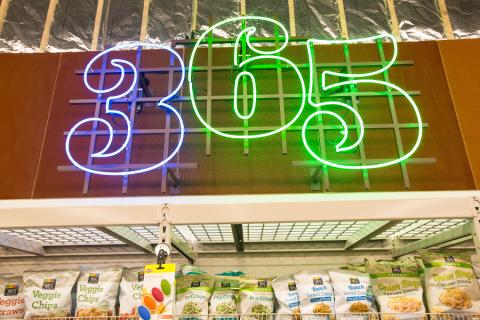 Whole Foods Market is dropping the name of its smaller-format 365 by Whole Foods Market stores a month after the natural food grocer revealed plans to discontinue its expansion of the concept, Yahoo Finance has reported.

All 365-bannered stores owned by Whole Foods – currently 12 open locations, according to the grocer's website – will be converted into traditional Whole Foods stores by the year's end, the news outlet said. Each will experience changes in signage, product assortments and back-end distribution, and, given their 25,000- to 30,000-square-foot size – 10,000 less than the average Whole Foods – may lack features such as a meat counter.

The 365 concept was first rolled out almost four years ago and was intended to function as a fewer-frills, value-focused chain that emphasized private label products. Whole Foods' flagship store brand is named 365 Everyday Value.

However, Whole Foods CEO John Mackey noted in an email quoted by Yahoo Finance and Business Insider that as the grocer consistently lowered prices at its core Whole Foods stores after their acquisition by ecommerce giant Amazon, the price distinction between the two formats has "become less relevant," and the company will continue down that path. While Mackey was optimistic about opening a large number of stores under the format just prior to Amazon's acquisition in 2017, only nine have opened since then, and some slated to open have done so, but under the Whole Foods banner.

One year ago, the Austin, Texas-based grocer, despite reports of 365's underperformance, still announced plans to open more than a dozen additional stores under the format.

Whole Foods Market operates more than 470 stores throughout the United States, Canada and the United Kingdom. Under the name of its parent company, Amazon, the based grocer is No. 8 on Progressive Grocer's 2018 Super 50 list of the top grocers in the U.S.