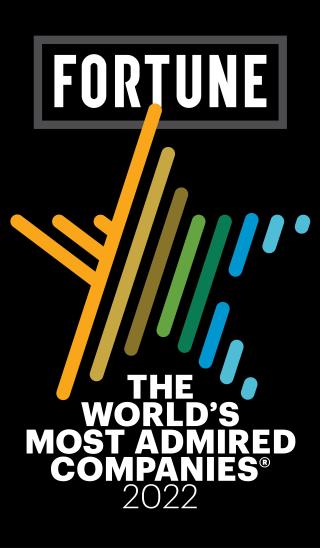 Amazon has scored a No. 2 All Star ranking on Fortune's World’s Most Admired Companies list.

Fortune has published its annual list of the World’s Most Admired Companies. The corporate reputation list is based on ratings calculated from thousands of businesspeople within various industries. Survey respondents are asked to rate companies in their own industry on nine criteria, from investment value and quality of management and products, to social responsibility and the ability to attract talent.

Ranking high for the third year in a row on the World’s Most Admired Companies list was Amazon. It scored second place in the overall All Star ranking, while grabbing the No. 1 spot in the Internet Services and Retailing category. Amazon has certainly made great strides in social responsibility. The big tech company rolled out several new utility-scale wind and solar projects around the world, including eight in the United States, in an effort to reach its goal of powering 100% of its business operations with renewable energy by 2025. Amazon also recently launched curbside recyclable packaging to make pickup and delivery better for the planet.

In the General Merchandisers category, Walmart Inc., Target Corp. and Costco Wholesales ranked Nos. 1, 2 and 3, respectively. BJ’s Wholesale Club came in at No. 5.

Helping Publix grab the No. 1 spot was its donation of nearly 400 million meals for families in need over the past two years through its perishable recovery program, farmers and families initiative, and Feeding More Together campaigns. Additionally, since 2020, the employee-owned company has opened 54 stores and created jobs for thousands of associates in its stores, manufacturing facilities and distribution centers to meet increased demand due to the coronavirus.

“Publix was built on the philosophy of doing the right thing, set by our founder, George Jenkins,” said Publix Director of Communications Maria Brous. “Because we’ve remained true to this philosophy and continue to operate by it more than 90 years later, Publix has continued to grow as a strong, healthy and vibrant company. We’re humbled to receive this accolade, especially during these challenging times.”

To see the full list, visit fortune.com/worlds-most-admired-companies/2022. As it has in the past, Fortune collaborated with partner Korn Ferry on this year’s survey of corporate reputations.