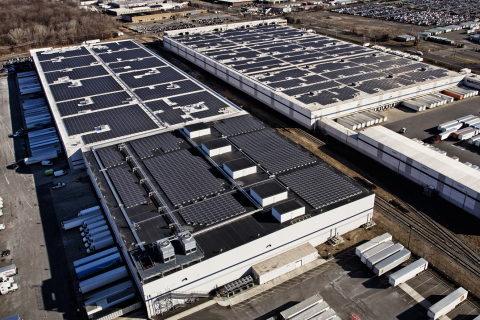 Working towards its goal of powering operations with renewable energy, Amazon announced several new wind and solar projects in the United States.

Taking another step in its goal of powering 100% of its business operations with renewable energy by 2025, Amazon announced several new utility-scale wind and solar projects around the world, including eight in the U.S.

The global projects will help power Amazon’s corporate offices, fulfillment centers and data centers. According to company information, the amount of clean energy produced by these locations will avoid the equivalent of the annual emissions produced by almost three million cars in the United States each year.

The U.S. projects include Amazon's first solar projects in the states of Arizona and Georgia, and additional projects in Ohio, Texas and Virginia. The solar project in Arizona will be paired with a 150-megawatt battery energy storage system to meet demand even when sunlight is not available. Through its 62 projects in this country, Amazon estimates that it has enabled more than 6 gigawatts of renewable energy.

“We are moving quickly and deliberately to reduce our carbon emissions and address the climate crisis,” said Kara Hurst, VP of worldwide sustainability at Amazon. “Significant investments in renewable energy globally are an important step in delivering on The Climate Pledge, our commitment to reach net-zero carbon by 2040, 10 years ahead of the Paris Agreement. Renewable energy projects also bring new investment, green jobs, and advance the decarbonization of the electricity systems in communities around the world.”

Amazon co-founded The Climate Pledge with Global Optimism in 2019. Other signatures include CPGs like PepsiCo and Unilever.

Seattle-based Amazon is No. 2 on Progressive Grocer’s 2021 list of the top food and consumables retailers in North America, while its wholly owned subsidiary, Austin, Texas-based Whole Foods, is No. 26 on PG's list.