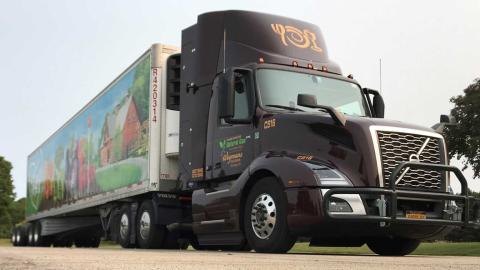 Wegmans’ Volvo truck is equipped with a Hyliion Hybrid CNG system enabling it to pull a tandem trailer set.

“While not our first foray into compressed natural gas, these are the trucks that allow us to imagine our fleet in a completely different way,” Rochester, New York-based grocer noted.

“Our early-model CNG trucks were everything we hoped they would be from a diesel reduction standpoint,” said Matt Harris, Wegmans’ fleet maintenance department manager. “However, when compared to our diesel-powered trucks, it was clear that if we wanted to continue to increase the ratio of CNG trucks in our fleet, improvements in the trucks’ performance were needed. Historically, one of the biggest limitations with the CNG driveline, which holds true for our first-generation CNG trucks, is its lower horsepower and torque output that limits the amount of weight you can haul. In Wegmans’ case, this is important because we often pull tandem trailer sets on the Thruway, and that requires a lot of power.”

Shortly after bringing CNGs to its Rochester fleet, Wegmans joined forces with Hyliion, an Austin, Texas-based provider of electrified powertrain solutions for Class 8 commercial vehicles, to retrofit an existing Wegmans’ CNG truck with an electric drive axle so that it would be able to pull tandems.

Wegmans’ first-generation CNG trucks also lacked a high-performing transmission and had a lower fuel capacity than their diesel counterparts, so the company procured two Volvo CNG trucks, both of which “offer a completely different transmission for improved shifting performance, as well as nicer comforts for our drivers in the cab, with heated windshields, automatic wipers and a backup camera with an 8-inch screen,” noted Wegmans. “The trucks’ CNG systems, built by Agility and filled with fuel from our [New York state] CNG partner, American Natural Gas, eliminate range anxiety with a 30% increase in fuel capacity over the older models, which puts them on par with any of our diesel trucks.”

The first Volvo CNG truck added to the fleet was designed to improve upon the older CNG models and to be used exclusively for pulling a single trailer. The second was a hybrid Volvo truck with a Hyliion Hybrid CNG system -- the first-ever Volvo truck fitted with the system.

“Like Wegmans, fleets want the fuel savings and emissions benefits that come with transitioning away from diesel, but also need practical solutions that are going to meet the needs of their businesses. That’s why we designed the CNG Hybrid system,” said Hyliion CEO and founder Thomas Healy. “We’re proud to work with Wegmans to not only bring this first-of-its-kind technology to market, but to collaborate on achieving the company’s long-term sustainability initiatives.”

“For many years, we’ve focused on running our fleet as efficiently as possible, from our driver training programs and our mile-per-gallon initiative, to the addition of compressed natural gas vehicles and collaborative partnerships with leading technology suppliers,” explained Harris. “It’s the right thing to do for our company and the environment. What we’ve accomplished over the last several years with Hyliion, ANG, and most recently Volvo, allows us to completely rethink the makeup of our fleet, how we run it, and shows the rest of the industry what’s truly possible with the right combination of technologies.”

Wegmans currently operates 19 CNGs in its fleet of almost 175 trucks. The grocer plans to increase its overall number of CNGs in 2021 while encouraging more widespread use of tandem trailer application CNG trucks in the future.

Compressed natural gas. the cleanest-burning transportation fuel on the market and the only sustainable, near-zero emission fuel currently available, is a key component of Wegmans’ fleet management strategy to reduce emissions and its dependency on diesel fuel, an initiative that has been in place since 2014, and so far has led to more than a 10% reduction in emissions.

Family-owned Wegmansoperates 103 stores in New York, Pennsylvania, New Jersey, Virginia, Maryland, Massachusetts and North Carolina. The company is No. 36 on Progressive Grocer’s 2020 PG 100 list of the topfood and consumables retailers in North America.