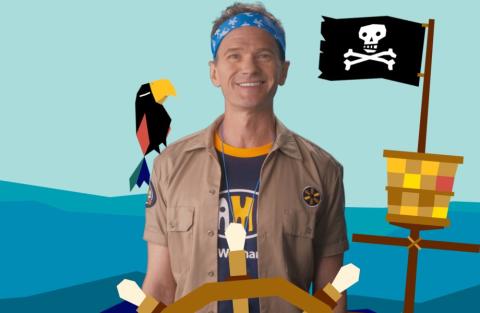 As families face a summer of social distancing and canceled group events, Walmart has come to the rescue with two new experiences to help parents and kids have fun and make memories. Camp by Walmart is a free celebrity-filled virtual camp that takes many of the rituals of that beloved American institution into families’ backyards, while a touring drive-in movie theater, presented in partnership with Tribeca Enterprises, will turn the mega-retailer’s parking lots into outdoor cinemas.

“Summer hasn’t really felt like summer yet, and I know I hear every day, ‘Mom, I’m bored!’” noted Janey Whiteside, chief customer officer at Walmart. “Through our digital means and vast footprint of stores, we’re hoping to bring some summer fun to families across the country. We know Walmart plays a role in our communities that extends far beyond getting them necessary supplies, and we see that now more than ever.”

Walmart has joined forces with Drew Barrymore, Neil Patrick Harris, LeBron James, Idina Menzel and Todd Oldham on Camp by Walmart, produced and developed in partnership with New York-based Camp, a Family Experience Co., and powered by the interactive video platform eko, also based in the Big Apple. The celebrities will serve as camp counselors, leading kids through sessions that range from arts and crafts to fitness and other activities to keep them active and engaged.

Beginning July 8, families can access 50 free Camp by Walmart activities by visiting the company’s app. Celebrity and expert-led camp sessions will launch across the summer, among them:

The program will offer 200 more new activities all summer long, while eko’s patented technology enables participants to make choices that shape the outcome of their experience, creating more interactions that reflect campers’ interest.

To take part in Camp by Walmart, consumers can download or update the Walmart app and look for Camp by Walmart in the app’s Services tab from the bottom navigation.

Walmart is also repurposing 160 of its store parking lots as contact-free drive-in movie theaters where people can safely gather to watch movies programmed by the Tribeca Drive-in team.

From August through October, the company will hold a combined 320 showings across the country. The family-friendly movie screenings will also feature special appearances from filmmakers and stars, along with snacks and drinks delivered directly to customers cars. Before each screening, Walmart will enable families to order their drive-in refreshments online for curbside pickup on the way to the movie.

For those who can’t wait until August, Walmart has also teamed with Tribeca Drive-in as presenting partner for the latter’s movie series, which kicked off July 2.

“Drive-ins have been a signature program for Tribeca since we started the Tribeca Film Festival 19 years ago after 9/11,” noted Jane Rosenthal, CEO and co-founder of New York-based Tribeca Enterprises and the Tribeca Film Festival. "But now, the Tribeca Drive-in is much more than a fun, retro way to see movies — it’s one of the safest ways for communities to gather. We are thrilled to partner with Walmart to bring more people together around the shared cinematic experiences that Tribeca is known for.”

Throughout this month, families in Arlington, Texas; Pasadena, California; Nassau County, New York; and Orchard Beach in the Bronx, New York, can watch Tribeca Drive-in screenings of popular films like “Wonder Woman” and “Space Jam,” with a mix of ticketed and free events honoring front-line workers.

Bentonville, Arkansas-basedWalmartoperates more than 11,300 stores under 58 banners in 27 countries, and e-commerce websites, employing 2.2 million-plus associates worldwide. Walmart U.S. is No. 1 on The PG 100, Progressive Grocer’s list of the top food retailers in North America, while Walmart-owned Sam’s Club ranks No. 9 on the list.