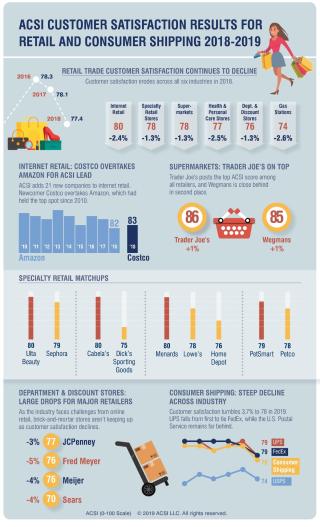 According to the “American Customer Satisfaction Index Retail (ACSI) and Consumer Shipping Report 2018-2019,” customer satisfaction with retail, including grocers, is down for the second year in a row, with the retail trade sector declining 0.9 percent to a score of 77.4 out of 100.

Further, although customers prefer online shopping to all other types of retail, even ecommerce fell 2.4 percent in the past year.

“There is a slump in customer satisfaction in every category of the retail sector,” affirmed David VanAmburg, managing director at the Ann Arbor, Mich.-based ACSI. “Internet retail versus brick-and-mortar retail, department stores versus specialty stores, it’s all down. Considering the importance of retail to overall consumer spending, this decline is a big deal.”

One factor in this widespread decrease in retail customer satisfaction, the report found, is poor customer service. With low unemployment usually accompanied by greater employee turnover, retailers must find and train new employees and deal with staff shortages, which in turn affect the companies’ ability to provide superior customer service.

“Historically, the ACSI has found that the more service typically required for a given industry, the lower the customer satisfaction, and it rings true for retailers this year,” added VanAmburg. “Things like courtesy and helpfulness of store staff, call center support, and even availability of merchandise on the shelves all have a service element and have seen drops from a year ago."

Whole Foods Market fell 2 percent to 79 despite its acquisition by Amazon, putting the natural food retailer in a tie with BJ’s Wholesale Club, which was down 1 percent; Hy-Vee, down 2 percent;  Kroger; also down 2 percent; ShopRite; unchanged from last year; and the combined score of smaller supermarkets, down 2 percent.

Southeastern Grocers saw the biggest decline, falling 3 percent to 76, while Walmart again brought up the rear, declining another 1 percent to 72.

In the ecommerce channel, Costco, scored highest on the ACSI scale, at 83, which the report attributed to its status as the value leader among online retailers. After inhabiting first place since 2010, Amazon dropped 4 percent to 82, its retail business growth slowing with the acquisition of Whole Foods. Target earned a score of 80 – the industry average – while Walmart was near the bottom, at 74.

Among department and discount stores, Costco again led, at 83, with Sam’s Club maintaining a score of 80. BJ’s Wholesale Club dropped 1 percent to 79, but Kroger’s Fred Meyer experienced the biggest decline in the channel, plummeting 5 percent to 76. Meijer also came in at 76 following a 4 percent drop. Shoppers in this channel, however, appreciated retailers’ mobile apps, which scored 82 for quality and 81 for reliability.

The ASCI measures and analyzes customer satisfaction with more than 400 companies in 46 industries and 10 economic sectors. Its annual report covers six retail categories — department and discount stores, health and personal care stores, specialty retail stores, supermarkets, internet retail, and gas stations — as well as consumer shipping. Reported on a scale of 0 to 100, ACSI scores are based on data from interviews with roughly 300,000 customers annually.