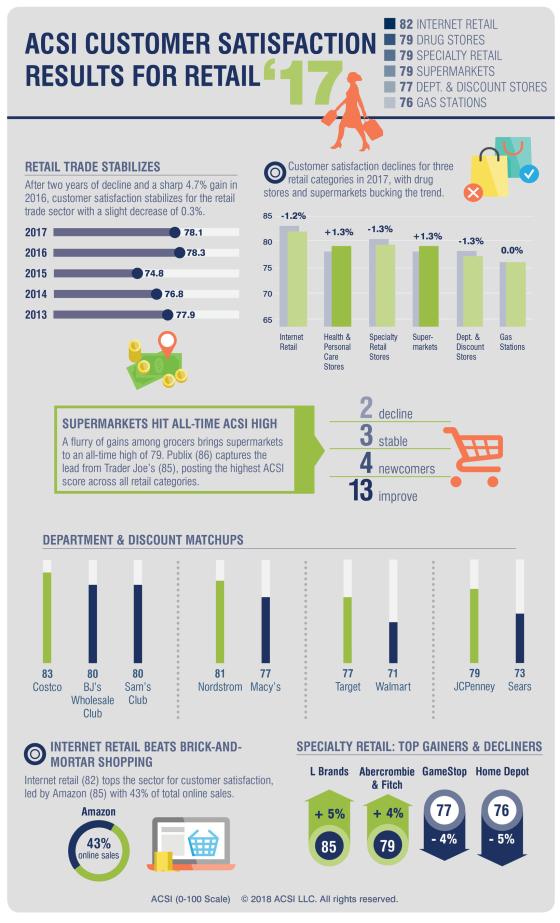 According to the “American Customer Satisfaction Index (ACSI) Retail Report 2017,” while supermarkets and health and personal care stores both gained a point, for an ACSI score of 79, department and discount stores dropped a point to 77, and specialty retail stores fell one point to 79. Additionally, Internet retail sites dipped one point to a score of 82, indicating that there’s still room for improvement in this sector.

“Amazon is nearly inescapable in retail right now, as the ecommerce giant makes moves into grocery stores and pharmacies, expanding its footprint into multiple retail industries,” noted David VanAmburg, managing director at Ann Arbor, Mich.-based ACSI. “The surge in customer satisfaction seen in some supermarkets and health and personal care stores shows how companies are focusing on customer satisfaction as one way to ward off Amazon’s push into new retail industries.”

Indeed, supermarkets proved to be one of the strongest retail industries last year, the report found, with 13 of 22 stores upping their 2016 scores. Publix Super Markets did best, rising to a score of 86 – the highest of any retailer studied. Trader Joe's came in second, at 85.

“While Trader Joe’s was unable to sustain its record-high score from last year, customer satisfaction with the grocer is still extremely high for a brick-and-mortar retailer, on par with Amazon's score in the internet retail category,” observed VanAmburg.

Whole Foods Market remained steady at 81, its recent acquisition by Amazon not yet having an effect on its 2017 score, while for the 13th straight year, Walmart Inc. garnered the lowest score among supermarkets.

Among pharmacy category, Kmart and Kroger were the highest-rated, tied with a score of 80. CVS came in at 78 – a company best – while Walgreens and Rite Aid – the latter set to merge with grocer Albertsons Cos. – tied at 77, and Walmart ended up in last place, at 75.

Acquiring Target pharmacies may have positively influenced CVS’ customer satisfaction scores: When the drug store operator’s score was divided into CVS and Target pharmacies, Target received a score of 80, while CVS came in at 77.

Costco led all department and discount stores with a score of 83, while Walmart division Sam’s Club and BJ’s Wholesale Club tied at 80. Target fell two points to a score of 77, but Walmart came in last with a score of 71, a point lower than last year. Dollar Tree, at 77, was down nearly 4 percent, but still came out ahead of Dollar General, at 73, the second-to-last position after falling 6 percent in the past year. Kmart owner Sears, meanwhile, dropped 5 percent to land at a score of 73. The retailer shuttered 400 stores in 2017, with more closures in the offing this year, which the report attributed to its slow adoption of online retail, as well as lingering customer dissatisfaction.

Amazon topped all ecommerce providers with a score of 85, one point down from its 2016 score, followed by Newegg, at 83, and eBay, Overstock and all others clustered at 81.

Internet retail sites’ 1.2 percent drop to an 82 score is due to several factors, the report noted, citing customers’ issues with checkout and payment, product images, customer-generated reviews, variety, availability of merchandise, shipping options, and site-generated product recommendations, all of which experienced declines.

The 2017 report, based on 50,186 customer surveys conducted throughout 2017, is available for download online.

A national economic indicator for almost 25 years, ACSI measures and analyzes customer satisfaction of more than 300 companies in 44 industries and 10 economic sectors, including various services of federal and local government agencies. Reported on a scale of 0 to 100, ACSI scores are based on data from interviews with about 180,000 customers annually.