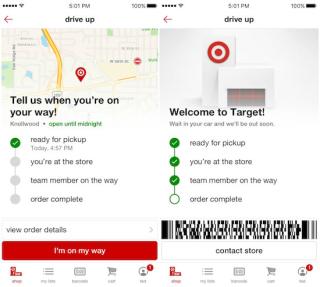 Target Corp.'s curbside pickup service has expanded to 200 stores across markets in the midwestern, southern and eastern United States, giving shoppers in the areas a new grocery ecommerce option.

Drive up, the click-and-collect option, allows users to place an order in the mass-merchandiser's mobile app and have the order hand-delivered directly to their car by a store team member. The 200 locations now enabled for the service are in such markets as Chicago; Indianapolis; Columbus, Ohio; Lansing, Michigan; Louisville, Ky.; Erie, Pa.; and South Charleston, W.V.

The latest expansion brings Target’s total number of Drive Up stores to more than 800 in 25 states. In late August, Drive Up will expand to even more markets, and by the holidays, nearly 1,000 stores should offer the service.

To sum up how Drive Up works, users:

The move continues Target’s expansion of omnichannel to better serve its customers. In March, CEO Brian Cornell stressed his intent to make Target “America’s easiest place to shop,” which means “blending the best of our physical and digital assets to create new experiences for our guests and reimagining our network of stores into hubs for commerce and community – inspiring showrooms, service centers and neighborhood-based fulfillment centers.”

Added Cornell: “Target has been on a multiyear journey to modernize every dimension of our enterprise, and in 2018, you will see us accelerate our pace. You can expect us to continue to invest in our team as our greatest differentiator, and introduce and scale new experiences, services and brands, all in service to our guests.”

Target’s most recent earnings call revealed strong ecommerce performance during the first quarter of its fiscal 2018, helping drive its strongest quarterly traffic growth in a decade. The rise of comparable sales in the digital channel was 28 percent during the period, contributing 1.1 percentage points of comps growth.

Omnichannel initiatives credited for helping the growth include: