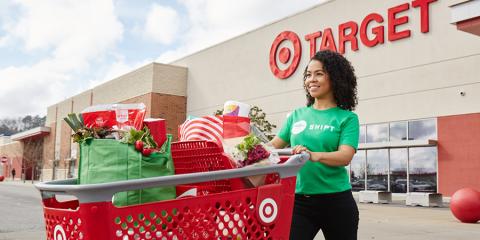 Nearly 4 million households in Boulder, Colorado Springs, Denver and Fort Collins, Colo., will be able to choose from 55,000-plus groceries, essentials and more

Beginning May 3, nearly 4 million households in the Boulder, Colorado Springs, Denver and Fort Collins areas will be able to choose from more than 55,000 groceries, essentials, home goods, electronics, toys and other items carried by the Minneapolis-based retailer for delivery to their doorstep. Delivery will be fulfilled by Target’s Shipt arm, which it purchased late last year, and people who sign up as members prior to launch will receive an annual membership for $49 instead of the regular $99.

More than 800 shoppers will be added to Shipt’s team to help fulfill the orders in Target’s new Colorado markets. The retailer intends to offer the service at the majority of its stores by the holiday season, and plans to be in nearly 180 markets and reach 80 million households by the end of the year.

"Same-day delivery was at the top of our list when we were thinking about ways to make shopping at Target even easier," said John Mulligan, EVP and COO at Target. "Shipt's personalized, customer-focused approach fits perfectly with our commitment to deliver a convenient, exceptional experience, and we're excited to begin offering same-day service across Colorado."

The news comes two days after Target expanded its click-and-collect service to 270 stores throughout the South and southeastern United States, part of an effort to offer the service at nearly 1,000 stores nationwide by the year’s end.

Together, these initiatives further Target’s plan for a true omnichannel experience, allowing patrons to shop the retailer inside or outside of its stores, when, where and how they wish to do so. Target also offers free two-day shipping on hundreds of items via its website, and next month will expand its Target Restock overnight-delivery program for everyday essentials to more than two dozen markets, covering nearly three-quarters of the U.S. population by the end of this year.

Target’s big plans to expand same-day delivery nationwide is not only similar to those of food retail giants such as Walmart, Albertsons and Costco, but also corresponds with findings from Progressive Grocer’s newly released 2018 Annual Report. While last year’s report showed respondents’ ecommerce growth largely in click-and-collect services, this year’s revealed that roughly double the number of respondents said that they now offer grocery delivery: Some 28 percent of respondents said that they offer it as a store-supported service, compared with 14.1 percent the year prior, and 31.8 percent reported offering it as a third-party-supported service, compared with 16.9 percent the year prior.