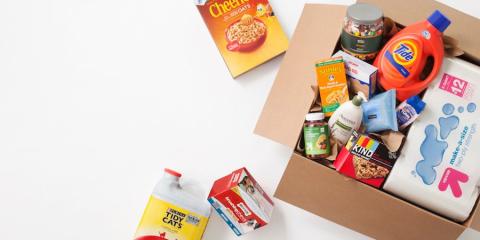 Target Corp.’s Restock next-day delivery service for essentials has expanded to guests in the Atlanta, Chicago, Los Angeles, New York, Philadelphia, St. Louis and Washington, D.C./Baltimore areas following tests in the Minneapolis, Dallas/Fort Worth and Denver areas. It also will launch in the San Francisco Bay Area in mid-October.

Restock users may build a box – up to 45 pounds – and select from more than 15,000 popular essentials to fill it, from personal care items to cleaning supplies. Orders submitted by 2 p.m. will be delivered the following day, for a fee of $4.99 each.

The service had its first test in Target’s hometown of Minneapolis back in May, expanding to the Dallas/Fort Worth and Denver areas in August. Additionally, product assortment expanded to include more essentials. In those three markets, the most popular items have been on-the-go snacks, beverages, cereal, macaroni and cheese, and paper towels.

“Guests need to keep daily essentials stocked, but finding time to buy them is tough — and it can be even more of a challenge when you’re talking about large, bulky items,” said Dawn Block, Target's SVP of digital. “If we can help our busy guests check off their shopping lists quickly and more easily, that’s more time they can spend with their families.”

By the time it launches in San Francisco, Target Restock will be available to 70 million people, roughly one-fifth of the U.S. population.

Same-day delivery, too, is becoming a reality for Target shoppers in select markets: Just over a month ago, the retailer revealed its plan to purchase Grand Junction, a San Francisco-based tech company that will allow it to expand same-day delivery service. At the time of the announcement, Target was piloting the service at its store in New York’s Tribeca neighborhood, with plans to expand to other stores in the city before the year’s end, and then to additional major cities in 2018.