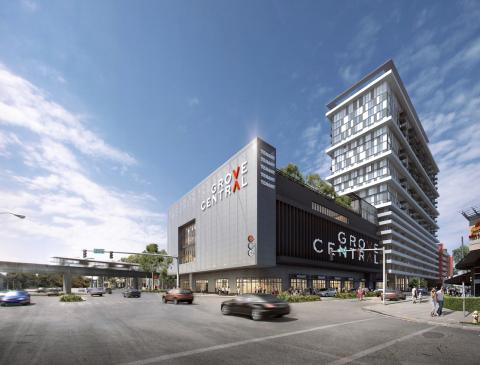 Rendering of Grove Central, which will include a new Sprouts Farmers Market.

As part of its expansion plans into Miami-Dade County, Sprouts Farmers Market has signed a 24,014-square-foot lease at Grove Central, a new mixed-use transit-oriented development (TOD) underway in Miami’s Coconut Grove neighborhood. The natural food chain's newest Coconut Grove location marks its third store in the county, with additional locations opening soon in Kendall and Homestead. Situated at the intersection of US-1 and 27th Avenue, the project is currently under construction and slated to open in 2023.

Grove Central, which is being developed by a joint venture between Miami-based developers Terra and Grass River Property, will include a 23-story residential tower with 402 multifamily, workforce and co-living units; a 1,250-space public parking garage; and a total of approximately 170,000 square feet of neighborhood-oriented retail space. The project will connect to and facilitate privately funded improvements made to the adjacent Coconut Grove Metrorail station, and integrate directly with The Underline linear park, Miami-Dade’s bus system, and the city of Miami’s popular trolley network.

“When we think of transit-oriented development, we want it to include a mix of amenities people want and need to access in their daily lives,” said Peter LaPointe, president of Grass River Property. “The addition of Sprouts in this location – at the crossroads of Coconut Grove and Coral Gables along one of the busiest commuter routes in South Florida – is not only a benefit to the residents who will be living at Grove Central, but also to those living in surrounding neighborhoods all along the Metrorail transit line from South Miami to Brickell. A grocery store is one of the key building blocks in bringing the concept of this TOD to life.”

Sprouts Farmers Market is well known for making healthy living affordable to everyday grocery shoppers and conducting its business in a way that's also good for the planet. For example, the Arizona-based grocer recently fulfilled its “cage-free or better” egg commitment. Sprouts is now sourcing all shell and liquid eggs sold at its 370-plus stores from cage-free, organic or free-range farms.

“Grove Central will be an exciting addition to the community, with tenants like Sprouts Farmers Market catering to the everyday needs of surrounding residents,” said David Martin, CEO of Terra. “Our vision for Grove Central is an easily accessible multimodal transit destination that combines a balanced mix of residential housing options and retail amenities, while promoting the Grove’s walkability, connectivity and the pedestrian urban experience.”

Phoenix-based Sprouts Farmers Market, which employs more than 35,000 associates at stores in 23 states, is No. 48 on The PG 100, Progressive Grocer’s 2021 list of the top food and consumables retailers in North America.