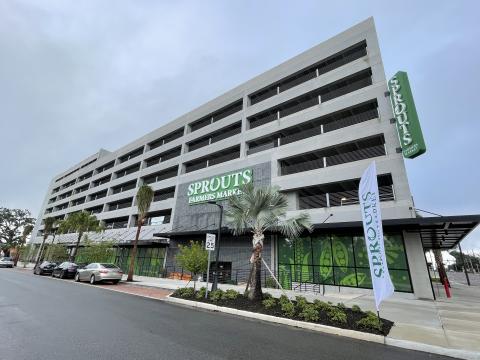 For its 25th location in the Sunshine State, Sprouts Farmers Market went urban.

One of the fastest-growing grocery retailers in the country opened its latest store in Tampa Heights, Fla., on Oct. 27.

The 24,000-square-foot store at 101 North 7th Avenue features a new layout, with fresh produce still at the center of the store but with stations for baked goods, a streamlined bulk foods department and an expanded plant-based assortment.

The store is a hybrid format featuring attributes from the retailer's smaller stores and some features from new stores opening this year and in 2022 (see image gallery below).

The Tampa Heights store is located just a few hundred feet from Tampa's downtown core, near hundreds of new apartments and mixed-use development that are attracting millennials and Zoomers from all over the city, state and the country. The new Sprouts offers garage parking and is walking distance to Tampa's premier food hall: Armature Works.

In August, Sprouts said it would delay opening some stores this year due to supply chain challenges, as the natural foods grocer also reported flat two-year same-store sales. But the grocery chain plans to open at least six new locations in Florida this year.

Earlier this month the Sprouts Healthy Communities Foundation pledged $3 million in grants to 115 nonprofit organizations to improve school garden learning and nutrition education. Since its inception in 2015, the foundation has granted $15 million to more than 300 nonprofit partners that have brought hands-on, garden-based learning to 1.5 million children and provided nutrition education programs to an estimated 900,000 K-12 students. Sprouts covers all of the foundation’s operational expenses, ensuring that every dollar raised goes directly to programming.

“Sprouts is committed to strengthening local food systems by providing our communities with access to fresh, nutritious food, and empowering children with the knowledge and resources to live a healthier life,” said Sprouts CEO Jack Sinclair. “Our foundation’s work with local partners in this effort is just one of the many ways Sprouts is growing goodness in our communities.”

Phoenix-based Sprouts Farmers Market, which employs more than 35,000 associates at 360-plus stores in 23 states, is No. 48 on The PG 100, Progressive Grocer’s 2021 list of the top food and consumables retailers in North America.