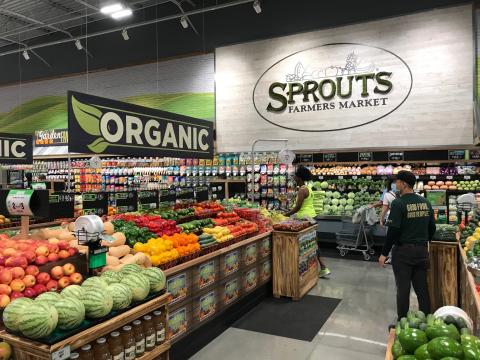 Inflation effects are not evident in Sprouts Farmers Market's same store sales, which are forecast to decline between 7% and 7.5% this year.

Sprouts said sales during its third quarter ended Oct. 3, fell 4% to $1.5 billion and same store sales declined 5.4%, compared to a prior year comp increase of 4.2%. The company began the year forecasting a full year comp decline in the low to mid single digits, but when customer traffic failed to rebound earlier this year, guidance was reduced to a decline of 5% to 7% at the end of the second quarter. Now the company expects a full year comp decline of 7% to 7.5%, including a fourth quarter decline of 3% to 5%.

CEO Jack Sinclair attributed the sales challenges to a 25% decline in customer traffic at physical stores that began last year at the height of the pandemic and coincided with an effort to reduce unprofitable promotions. The company doesn't want to return to the days of margin-eroding, brand-degrading promotions, but Sinclair said marketing changes are in the works.

"We're focused on delivering a clear message that highlights our sharp produce pricing, innovative products, and a farmer's market experience to drive additional transactions in the quarters and years ahead," Sinclair said. "Our focus remains on adding profitable sales growth, getting more customers in the door and creating more loyalty with our target customers. Earlier this year, we fell short in communicating our commitment to great prices in our marketing, especially in produce."

Sprouts may be able to quickly pull some sales generating levels with mass market promotions to drive traffic, considering it largely exited the market in favor or targeted digital offers. Also, its comparisons to prior period are getting easier. Its fourth quarter and a full year figures are low, considering Sprouts’ comparisons to the prior year are not as challenging as those faced by other grocers. For example, Sprouts reported 3.7% gain in the fourth quarter of 2020 and a full year gain of 6.9%. Those are not huge numbers to lap, especially considering the benefit other retailers have seen from rampant inflation across all food categories.

Despite the sales challenges and modest guidance, Sinclair focused on the fact that the third quarter numbers were an improvement from the second quarter when sales declined 7% and same store sales declined 10%.

“Our third quarter sequential improvement in sales and robust profits, combined with the early performance of our two newly designed stores, give us confidence we are making progress in transforming Sprouts, built on the long-standing foundation of a farmer’s market heritage," Sinclair said.

The robust profits Sinclair referenced involved a 6% gain in net income, which increased to $63.8 million from $60.2 million. The company noted that those figures were markedly higher than the third quarter of 2019 when net income was $26 million. Sinclair joined Sprouts as CEO in June 2019.

The profit improvement was driven by expense control, as SG&A as percent of sales declined to 28.04% in the third quarter, compared to 30.11% during the comparable quarter the prior year. Meanwhile, gross margins decreased by a lesser amount, dropping to 35.76% from 37.07%

“This decrease was driven by the anniversary of elevated demand during the height of the pandemic and the balancing of cost inflation and retail pricing during the quarter,” the company said regarding the gross margin decline. “Our efficient promotions, attractive everyday pricing, shrink improvement and differentiated assortment continue to result in margins superior to our historic trends, contributing to a 265 basis point increase over third quarter 2019.”

The company said its reduction in SG&A, “primarily reflects lower COVID-19 pandemic response costs, including incentive compensation in the prior year, along with lower marketing and e-commerce expenses.

"Moving forward, while there is work to be done, we are supported by a robust unit growth story, passionate team members, a loyal customer base, and our fresh differentiation, providing the ingredients for long-term success as a specialty store destination."

Regarding unit growth, Sprout confirmed that six of it original 20 openings planned for this year would fall into 2022. The source of the delay, according to the company, is “continued difficulties in obtaining necessary equipment from third parties because of supply chain delays complicated by the COVID-19 pandemic.” The shift will result in a surge of opening next year with between 25 and 30 units expected, according to CFO Chip Molloy.

Sprouts ended the third quarter with 366 stores in 23 states.

Phoenix-based Sprouts, which employs about 35,000 associates, is No. 48 on The PG 100, Progressive Grocer’s 2021 list of the top food and consumables retailers in North America.