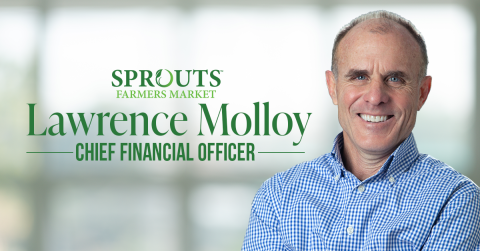 Sprouts Farmers Market, Inc. has tapped current board member Lawrence “Chip” Malloy as its new CFO following the departure of Denise Paulonis, who had served as CFO since January 2020. She is leaving the natural and organic food retailer to take on a new role as CEO at Sally Beauty Supply, where she has been a board member since 2018.

The position is familiar to Malloy, who previously stepped in as Sprouts’ interim CFO from June 2019 until Paulonis’ arrival in early 2020. He also held CFO roles at PetSmart, Inc. and Under Armour, Inc.

As he leads the financial operations for Sprouts, Malloy will vacate his seat on the board of directors. He was appointed a board member in 2013.

“There is no better successor to oversee our financial function than Chip,” said Jack Sinclair, CEO of Sprouts Farmers Market. “Chip’s extensive knowledge of all aspects of our business and strategy and long-tenured executive experience makes him ideally suited to lead our finance team as we execute on our strategy.”

Sinclair also gave Paulonis a nod for her efforts in helping Sprouts stay on track, as the company opens a series of new stores and rolls out smaller format locations as part of an ambitious growth plan. “Denise was integral in the formation of our long-term growth strategy and has set the company up for continued and sustained success. I wish her the best as she assumes an exciting new leadership role,” he remarked.

Phoenix-based Sprouts Farmers Market, which employs more than 35,000 associates at 360-plus stores in 23 states, is No. 48 on The PG 100, Progressive Grocer's 2021 list of the top food and consumables retailers in North America.