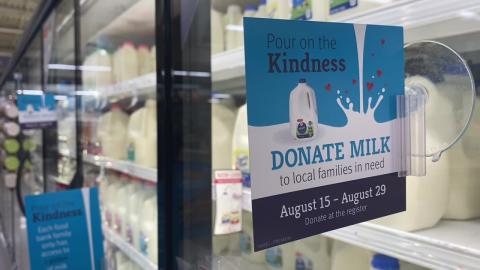 Thanks to SpartanNash's successful "Pour on the Kindness" campaign, 127,465 gallons of milk will be donated to local food banks.

In less than three weeks, SpartanNash’s milk drive raised $350,000 for local food banks and pantries that were short on the nutritional beverages. During the “Pour on the Kindness” campaign that ran from Aug. 15-29, shoppers at more than 145 banners of Family Fare, D&W Fresh Market, VG’s Grocery, Martin’s Super Markets and Dan’s Supermarket donated at the register or texted their contributions to a number using the term "MILK." In addition to funds raised from the drive, the United Dairy Industry of Michigan (UDIM) donated $20,000 to the effort supporting families in need.

“The majority of food banks report that they don't have enough milk available for their clients, and SpartanNash is honored to have played a role in making nutrition more accessible to local families,” said SpartanNash President and CEO Tony Sarsam. “One hundred percent of the funds raised from this campaign will be used to purchase milk at cost for these food banks and pantries throughout the entire year.”

Added Sharon Toth, CEO of UDIM: “SpartanNash Associates and shoppers stepped up to assist local families in need, raising funds to supply over two million glasses of protein-rich, bone-building milk for their meals. The Michigan dairy farmers are proud they get to see their product nourishing the communities they serve.”

SpartanNash, which often emphasizes local products in its stores, kept both the community donations and the milk close to home. The milk supplied during and after the SpartanNash campaign is produced from about 1,200 dairy farms throughout the region, 97% of which are family-owned.