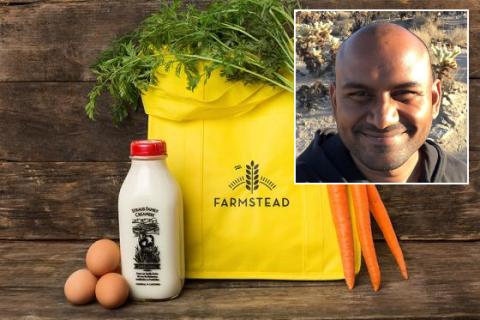 Food insecurity is a problem in the San Francisco Bay Area, where 11.5 percent of the population suffer from the issue, and cost of living is higher than almost anywhere else in America.

In the grocery industry, the region is known as the home of companies – big and small – that are developing the technologies that will help reduce costs while furthering growth in an omnichannel world. One grocer, however, is using that technology for a different purpose.

AI-powered “micro-grocer” Farmstead has rolled out several platforms and initiatives to help reduce food waste while also reducing the number of people suffering from food insecurity. Through its Buy One, Give One program, partnerships with charities and other Bay Area companies, and even autonomous grocery delivery, the San Francisco-based grocer is using the power of technology and strong partnerships for a higher purpose: making food more accessible and life better for the locals.

Progressive Grocer sat down with Farmstead Founder and CEO Pradeep Elankumaran at Shoptalk 2019, which started March 3 and ends today in Las Vegas, to discuss the hunger-waste crisis, what his company is doing to solve it, and how other grocers can do their part.

Progressive Grocer: Thanks for taking the time to talk with us, Pradeep. We know there's a huge hunger-waste paradox plaguing America. Tell us how it's specifically affecting the Bay Area.

Pradeep Elankumaran: Bay Area income levels are very unevenly distributed, and there's a lot of hunger in general – and a lot of charities that do need fresh food. Historically, fresh has been tough because it's much easier to donate non-perishable food, right? They keep for a while. But fresh, especially if we want to be healthy, is really the way to go. And the goal for us was that we shouldn't have a lot of waste in general – and if we do have waste, we should route it properly and very efficiently. So in the Bay Area, it's definitely tricky because there are a lot of businesses donating, but getting the routing done efficiently is quite challenging.

Progressive Grocer: For those who don't know, tell us a bit about Farmstead – how it works, and how it's impacted the problems of food waste and hunger in the Bay Area.

Elankumaran: Our mission is to broaden access of high-quality food to everyone. Typically, the consumer problem we're really trying to solve right now is that everyone is clamoring for fresh, on-demand delivery, but it's quite expensive, and it's very inaccessible. So, our approach is to use technology to redo all aspects of groceries so that we can actually provide our customers with a compelling selection.

A very specific problem that we solve is: How do you skip three of the stores that you are normally going to and buy at Farmstead instead? With a few taps of a button, stuff shows up at your door, and you can can use that time saved to do something else. Our approach is really around reducing costs all over the place. So the majority of our deliveries, for example, are free deliveries, and the majority of customers are tied to a weekly system, and both of these things allow us to predict very finely the requirements that are necessary on a day-by-day basis to be quite efficient and cut down on waste dramatically.

The way we approach food waste is one, try not to have too much of it and two, when you do have it make sure it's routed properly. The way we cut down on food waste is we use machine learning models to very specifically predict how many of these perishable and non-perishable items we should carry in between our vendor delivery days so that we always have high availability, so when you buy an order in real time for the first time ever, we have milk that we can sell – but we don't carry too much milk and waste it. So, in contrast to a supermarket who, including the distribution center has a 35 percent food waste, Farmstead has about 8 to 10 percent, and that's vastly different.

We are buying wholesale; we're selling retail because we don't waste a lot; we're keeping a lot more of that margin; and we use that margin to finance our picking and our delivery to your doorstep. All the while, you're getting a phenomenally different experience as a customer, while at the same time food waste is dropping. You're feeling great because you're saving time, you're saving money, and because of the eco-friendly nature of our deliveries with compostable bags, with reusable bags and ice packs, all of it makes you quite happy that you're helping save the planet.

Progressive Grocer: At the National Retail Federation's annual trade show in January, Kroger CEO Rodney McMullen spoke of self-awareness in grocery retail transformation: knowing what you can do on your own and knowing when you truly need a partner. Tell us about Farmstead and it's experiences here.

Elankumaran: If you really want to redo the way food moves around in this country and get customers a very compelling experience while saving them time, money and being super eco-friendly, you have to somewhat start from scratch. There is a point in most of these companies that start from scratch where you really have to consider the partnership conversation.

I think Rodney is right. At this moment in time, online adoption is pretty horrific. Depending on who you talk to it's between 2 and 8 percent. It rounds down to zero. It doesn't round up to some substantial number. So, going from 8 percent to something a lot larger will require a very thorough rethinking of the way that things are currently done. Grocers are extremely smart, they have spent a lot of time optimizing the way that their supply chains work. That was great until everyone starting buying food online, and as people started buying food online, it became more and more clear that the picking within a store construct is quite challenging.

More importantly, when the net margins to the fixed cost of stores and the variable cost of stores tend to be quite low, adding more costs on top for delivery and picking is challenging. In an environment where everyone is expected to rapidly grow, the challenge is always: "OK, we have to grow by opening more stores." There's a risk that these stores might not have customers in the long run. "OK, we can do this picking and delivering thing, but when we do that, there's a risk that we might not make money on every order." So there is a path here where both grocers and companies like ours can somewhat thread the needle and bring technology to bear and a renewed way of operating to bear so that we can solve problems together.

Progressive Grocer: Farmstead has some lofty goals and is clearly making progress with them. But in the end, what does success ultimately look like to you and the company?

Elankumaran: Our goal is to broaden access. We have been pretty steadfast about that from day one. There's a reason we carry both organics and conventionals, and there's a reason you can buy Kraft Mac N Cheese and an $18 wheel of cheese on Farmstead. It is very true that organic adoption is increasing, but at the same time, local product adoption is increasing as well. Our goal is to broaden access, while in the long run rewiring how food moves across the country. That way, what you are getting more often than not, for any particular price point that you can afford, is the freshest.

Progressive Grocer: Taking little steps can add up and solve a big problem. What little steps do you think other grocers can take to solve the hunger-waste paradox in their markets or other markets, even if they may not have the same technological capabilities Farmstead has?

Elankumaran: This is a somewhat of a tricky question. When you're a grocer and you tend to have waste, you still need to do something with that waste. The question becomes: Is there an upper limit to every market having so much waste? Do we need to have this waste? And once we have it, what do we do with it? There was a time we were donating so much, people told us we can't do much with this extra food. And it wasn't actually a lot.

Grocers have a somewhat similar problem which is: "I have a certain amount of waste; I shouldn't have this waste in the first place, but I have it because customers are expecting when they walk in that they will see a bounty of produce sitting around." When you don't have it, you wind up in scenarios where people are saying. "I'm going to go to another store," and then you potentially lose that customer.

Overall, the one thing I always kind of harp on about when it comes to grocers is, digitize, and do so with very crisp data. I think data collection is quite tricky. The only reason we were able to do the things we've been doing is because we have been collecting very sanitized data for a very long time at Farmstead. So when the time came where we put our limits on the food waste, and we were capped out at about 15 percent, all of the data that we were collecting allowed us to turn the AI model on, and that's really what got us to well under 15 percent at this moment in time.