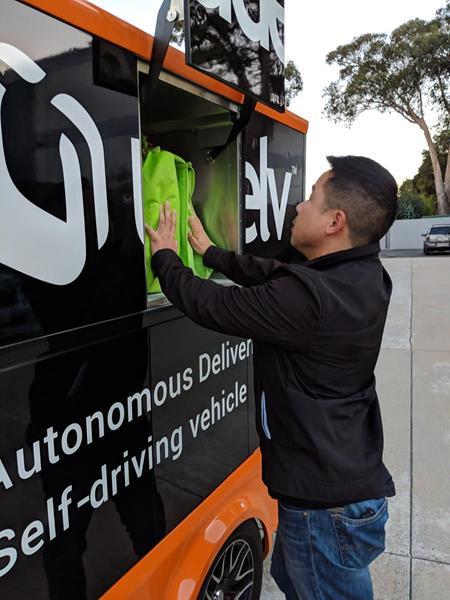 An artificial-intelligence (AI) -powered "micro-grocer" operating in the San Francisco Bay Area is the next to begin piloting grocery delivery via autonomous vehicles, following announcements in recent months from other grocers using the grocery technology.

Farmstead, the San Francisco-based grocery ecommerce startup that claims to be the nation's first AI-powered digital grocer, sourcing and delivering fresh food from farm to fridge in an hour, is partnering with Burlingame, Calif.-based autonomous-vehicle-provider Udelv in the pilot. Said to be up and running in just a few weeks, the program launched in the Bay Area last month and soon will expand to other areas served by the ecommerce grocer.

When ordering groceries for delivery via the self-driving vans, which serve select routes in the area, customers:

In the near future, vans will travel with one passenger: a safety operator, per California regulations.

"While many services have talked about making deliveries via autonomous vehicles, Farmstead is actually doing it," said Farmstead CEO and co-founder Pradeep Elankumaran. "We envision a future where autonomous delivery is the norm in our space rather than the exception. This technology will help us be more efficient, enabling us to get fresh groceries into our customers' homes even faster and cheaper than before. Customers who have already experienced our autonomous-vehicle delivery have been blown away – with Udelv’s help, we can’t wait to bring it to all our service areas."

Several grocers large and small this past year have introduced grocery delivery via self-driving vehicles in select markets, the most noteworthy being the Kroger Co., which announced a pilot in June and launched it months later in Scottsdale, Ariz.

Additionally, Santa Clara, Calif.-based Robomart, said to be the world’s first self-driving store, began its own pilot this fall, and Oklahoma City-based Buy For Less, which operates independent grocery stores under four banners -- its namesake banner, Supermercado, Uptown Grocery and Smart Saver -- is working with Udelv on what is claimed to be the "world's largest contract" for autonomous grocery delivery vehicles, set to launch early next year.

Founded two years ago, Farmstead uses software that allows customers to quickly select items from a carefully curated assortment of local farm produce and groceries. After the first order, the software’s AI calculates and predicts shoppers’ habits to know exactly how much food to order from local sources daily, weekly, seasonally and annually, thus reducing food waste. Food left unpurchased is donated to Feeding America, which sends it to a Bay Area women’s shelter.

Additionally, unlike other online grocers that deliver, Farmstead doesn't pack and fulfill orders from large, remote warehouses, charge high fees to send a third party to the supermarket, or bill for delivery charges. Its grocery fulfillment model actually relies on cutting out the supermarket altogether.

As well as delivery via manned or self-driving vehicles, Farmstead offers 30-minute grocery pickup in the Bay Area. It launched the click-and-collect service late last year.