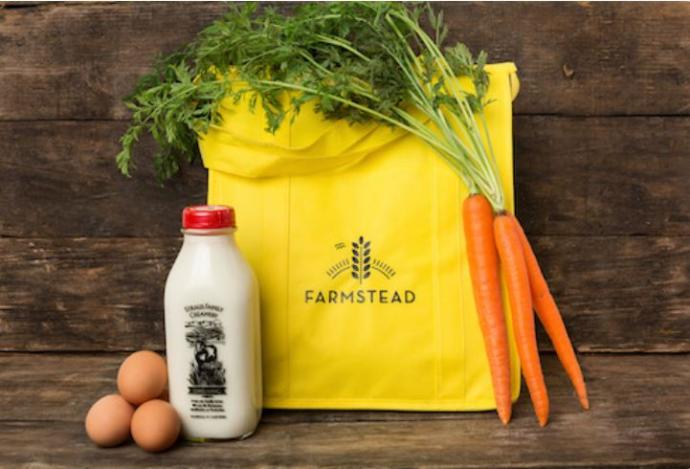 A new AI-powered digital “micro-grocer” that sources and delivers local food from farm-to-fridge in 60 minutes has launched in the San Francisco Bay Area.

Founded just a year ago, Farmstead, which seeks to reinvent the supermarket model with its new technology, has so far completed more than 15,000 deliveries to thousands of Bay Area customers, and has raised $2.8 million in seed funding from Resolute Ventures, Social Capital, Y Combinator and Joe Montana’s Liquid 2 Ventures.

The grocer’s fulfillment model is designed to reduce rampant food waste in an industry that generates more than 38 million tons of it each year, with one in every seven truckloads of perishable foods delivered wasted. Its software allows customers to quickly select items from a carefully curated assortment of local farm produce and groceries. After the first order, the software’s AI calculates and predicts shoppers’ habits to know exactly how much food to order from local sources daily, weekly, seasonally and annually, thus reducing food waste. Food left unpurchased is donated to Feeding America, which sends it to a Bay Area women’s shelter.

"In 2017, consumers shouldn't have to drive to the store, stand in a line, and buy food of questionable quality which then goes to waste,” said Farmstead CEO and co-founder Pradeep Elankumaran. “By sourcing and delivering the best products to customers in just the right amounts in under an hour, we help our customers throw out less food and take fewer trips to the store each week, cutting down on waste and pollution."

As opposed to online grocery delivery services, Farmstead does not pack and deliver groceries from large, remote warehouses; charge high fees to send a third party to the supermarket; or bill for delivery changes. Instead, its grocery fulfillment model cuts out the supermarket altogether.

A constellation of “micro-warehouses” in the Bay Area is stocked with an appropriate amount of local, minimally packaged foods, and delivery drivers are algorithmically routed to use the most efficient, traffic-free and eco-friendly routes, resulting in less congestion. Minimal packaging and reusable ice packs and bags, as well as reusable milk bottles, are recollected after deliveries to reuse.

As for cost of use, Farmstead matches local supermarket prices and does not require minimum purchase requirements following initial orders. Flexible delivery options allow for one-hour, same-day and weekly services, with weekly eco-optimized delivery routes free of charge. Otherwise, each delivery is $3.99, with one-hour service costing a dollar more.

Farmstead is another example of a technology startup seeking to reduce food waste while driving down costs of goods and services, two initiatives that have lately gone hand in hand in the grocery industry. In May, Canadian company Flashfood announced its partnership with a Longo’s store in Toronto, allowing shoppers to purchase perfectly good surplus food on the phone, usually with three days to a month until the “best before” date, at “massively reduced” prices. The technology, available for grocers in the United States, notifies users on their phones when new deals are available, pay via their phones, and pick up their purchases at the in-store Flashfood zone on the same day.