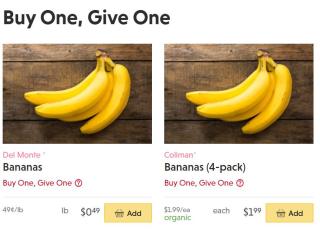 AI-powered “micro-grocer” Farmstead, which seeks to reinvent the supermarket model with its new technology, has added a new technology platform to fight hunger and reduce food waste in the San Francisco Bay Area, where a quarter of residents struggle with food insecurity.

Buy One, Give One seamlessly connects food vendors, donors and customers who want to contribute to programs that serve hungry children, and helps charities quickly sign up to receive food donations. Customers can simply purchase an eligible product through Farmstead, which will be donated to a local charity within days.

“It’s unacceptable that every year, $160 billion worth of perishable food goes to waste in the U.S. while millions of people, especially children, lack a reliable food supply,” said Farmstead CEO and co-founder Pradeep Elankumaran. “We created this platform to make it incredibly easy for people who buy local, sustainable food to share that with the Bay Area’s neediest children and offer them access to healthy, local fresh produce, all with a single click.”

Donations first will center on fruits and vegetables for students and after-school programs to use as healthful snacks. Vendors can donate to the charity network by submitting a pledge to match any products sold through the platform, and food banks or pantries can sign up to receive the donations.

To launch the program, Farmstead has partnered with the Boys and Girls of Club of the Peninsula to launch the program, working in conjunction with Feeding America and Second Harvest Food Bank, but local charities all over the Bay Area are encouraged to apply to receive donations.

The San Francisco-based startup made waves last fall when it revealed that it had completed 15,000 deliveries since its founding a year prior, as well as securing $2.8 million in seed funding from Resolute Ventures, Social Capital, Y Combinator and Joe Montana’s Liquid 2 Ventures. It made further news when it launched half-hour click-and-collect weeks later.

Farmstead's fulfillment model is designed to reduce rampant food waste in an industry that generates more than 38 million tons of it annually. Its software allows customers to pick items from a carefully curated assortment of locally produced groceries and produce, and after the first order is made, AI calculates and predicts shoppers’ habits to know exactly how much food to order from local sources daily, weekly, seasonally and annually.