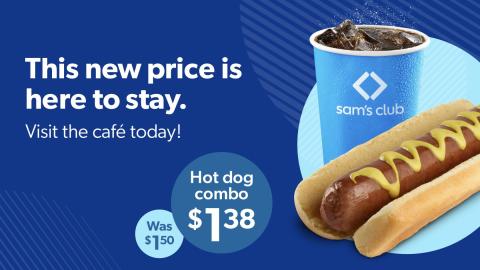 According to Sam's Club, lowering the cost of its hot dog combo is indicative of its journey to make its membership "the most valuable subscription."

Sam’s Club has lowered the cost of its hot dog combo in its cafes from $1.50 to $1.38. While that may not seem like much to inflation-weary consumers, the warehouse club chain said that the move is indicative of its journey to make the Sam’s Club membership “the most valuable subscription.”

“[L]owering the price by 12 cents on a member-favorite item is just another way to show we care about every penny (literally) [members] spend with us and to show our commitment to delivering great quality and value – one hot dog combo at a time!” the company noted in a statement.

Sam’s Club touts that its Member’s Mark Beef Franks are highly rated (4.7 stars) and are the No. 1-selling hot dogs in its clubs. They’re so popular that clubs also sell them in the coolers so that members can enjoy them at home.

The lower cost undercuts fellow competitor Costco Wholesale Corp.’s iconic $1.50 hot-dog-and-soda combo. Costco’s CEO has vowed never to increase the price of the combo, saying that it would remain at $1.50 “forever” on an earnings call this past September. The popular menu item has remained at $1.50 since the 1980s.

Although Sam’s Club has lowered the cost of its hot dog combo for members, the company has recently raised its annual membership fees for the first time in nine years. Starting last month, the annual fee for a standard membership increased from $40 to $50 and from $100 to $110 for Plus members.

Sam’s Club said that it remains aware of the current inflationary environment and is taking action this year to counteract the fee hike. Members will receive store rebates that cover the cost of the increase.

“We are mindful of the financial pressure on wallets right now,” wrote Sam’s Club CEO and President Kath McLay in an email to members. “So this year’s renewal is on us.”

Sam’s Club, a division of Bentonville, Ark.-based Walmart Inc., operates nearly 600 clubs in the United States and Puerto Rico. Each week, approximately 230 million customers and members visit Walmart’s more than 10,500 stores and numerous e-commerce websites under 46 banners in 24 countries, with approximately 2.3 million associates worldwide. Walmart U.S. is No. 1 on The PG 100, Progressive Grocer’s 2022 list of the top food and consumables retailers in North America, while Sam’s Club ranks eighth. Meanwhile, Issaquah, Wash.-based Costco has more than 550 locations and is No. 3 on The PG 100.