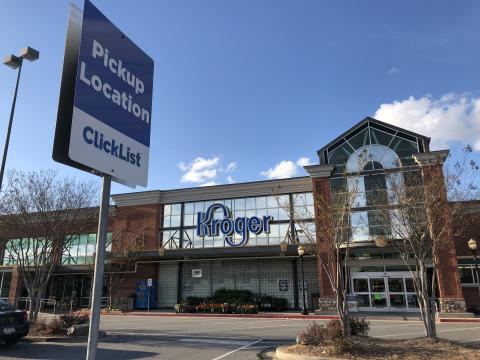 Kroger says Pickup and Delivery sales growth continued to perform in the mid-30’s during the quarter.

Halfway through the second year of its transformation plan, The Kroger Co. says its digital investments to reposition the company for the future are continuing to pay off.

The Cincinnati-based grocery chain reported a 2.5% increase in same-store sales, excluding fuel, up from the corresponding period a year ago and beating estimates of 1.9% growth. These were the best same-store sales reported by Kroger since the start of Restock Kroger.

Kroger also said the retailer’s Restock Kroger plan no longer expects to hit its target of $400 million in incremental profit by 2020.

But in an earnings call, McMullen stressed that the retailer’s “internal customer measures are improving even faster” than same-store sales and other growth metrics. “There is always a lag between improving the customer experience and when the customer will reward us,” he said.

Some other positive trends for Kroger during the second quarter included:

For the period ended Aug. 17, Kroger earned 44 cents per share. That was up 7% from the 41 cents it earned in the year-ago quarter and it beat estimates by the same margin. Kroger reiterated its full-year guidance of same-store sales growth of 2% to 2.25%. Kroger also reiterated its full-year guidance for adjusted earnings of $2.15 to $2.25 per share and operating profit of $2.9 billion to $3 billion.

Kroger shares have fallen 12% in the past six months, but they’ve climbed 22% since bottoming out in late July. Kroger’s stock was down 25 cents, or 1%, to $25.76 in mid-afternoon trading on Thursday.

Kroger is in the throes of a massive overhaul of its business model, investing in digital capabilities, technology and partnerships such as that with British retailer Ocado.

“We know Ocado’s value is not just its current capabilities, but also in how quickly the company is able to innovate to serve a rapidly developing online consumer market,” McMullen said.

The company just this month said it is rolling out an extension this fall of its popular Simple Truth private brand, called Simple Truth Plant Based, which will include fresh meatless burger patties and grinds as well as plant-based cookie dough, pasta sauces, sausages, deli slices, dips and other items.

On Nov. 5 Kroger will host an investors conference in New York City where the grocer says it will detail its progress against the key metrics in the supermarket business and its momentum.

“Transformation is incredibly difficult,” McMullen said. “The Restock Kroger transformation journey sets the company up for long-term growth going forward. And the benefits we have seen thus far have helped Kroger in our transformation from grocery to growth company. We have the right overall strategy and framework for this business and look forward to telling you more about it in November.”

Kroger competitors Walmart and Target posted higher sales in their most recent quarters thanks to similar investments in digital and merchandising.

Employing nearly half a million associates who serve more than 11 million customers daily through a seamless digital shopping experience and 2,761 retail food stores under a variety of banners, Cincinnati-based Kroger is No. 2 on Progressive Grocer’s 2019 Super 50 list of the top grocers in the United States.