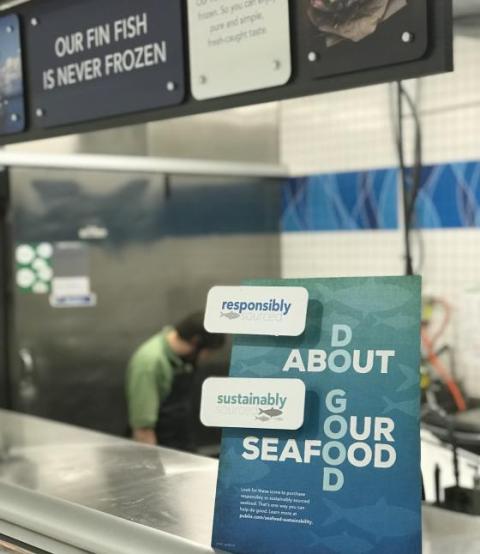 Although long committed to seafood sustainability, Publix is being more vocal with shoppers about the work that has gone on behind the scenes

Signs touting “responsibly sourced” and “sustainably sourced” began showing up in Publix Super Markets seafood departments last month. And soon, Publix store-brand seafood packaging will sport a new look for the first time in 15 years. The operator of nearly 1,300 stores wants seafood shoppers to know that its sourcing claims are backed by rigorous quality assurance standards created by third-party organizations so shoppers feel good when buying seafood at Publix, whether fresh or frozen, wild-caught or farm-raised.

“We know that in today’s world, customers strongly desire to shop with brands that they believe are part of the solution, not part of the problem, and they demand transparency,” said Pete Mowitt, Publix's VP of product business development for bakery and meat. “We want our customers to say, ‘I trust the Publix brand. I see they  care about my community and the environment. I feel good about shopping at Publix.’”

Shoppers have trusted Publix for decades, but with the company being more vocal about sustainability attributes of its seafood in marketing, store signing and product packaging, a “trust but verify” approach is being taken. Seafood suppliers to Publix that comply with various requirements of standards-setting organizations will now be subject to new reporting requirements and documentation.

“As a company, we’ve always been quiet and just done things behind the scenes, but we are jumping out front now,” said Guy Pizzuti, Publix seafood category manager. “We are going to start doing reverse audits on sustainability information, because we have to make sure the information we are plugging in is accurate. This is a different game for us, and we are very protective of our brand.”

"Brand" is a word that is used a lot at Publix, and rightly so. The company is a highly regarded food retailer that has earned shoppers’ trust through decades of consistent execution. For example, Publix is one of the few major retailers that offer fresh, never-frozen fish, with many species available for sale just days after they land at a dock. Its latest sustainability efforts are another way to earn trust, but Pizzuti and Mowitt recognized that nothing happens at retail if suppliers aren’t on board with the program.

That’s why earlier this fall, the pair convened a seafood sustainability summit at Publix headquarters in Lakeland, Fla. The goal, broadly, was to share the retailer’s commitment to sustainability, provide an update on key sourcing and regulatory challenges, and then get into nitty-gritty details about use of a reporting portal, timelines around the packaging conversion, and key process changes to simplify store-level execution for employees tasked with making sure that sustainably and responsibly sourced products are properly signed.

“You are here today to help us change the industry and drive sustainability forward,” Pizzuti told the roughly 100 attendees at the sustainability event, the third such event Publix has held in the past 10 years. “We need your support to help us get there.” 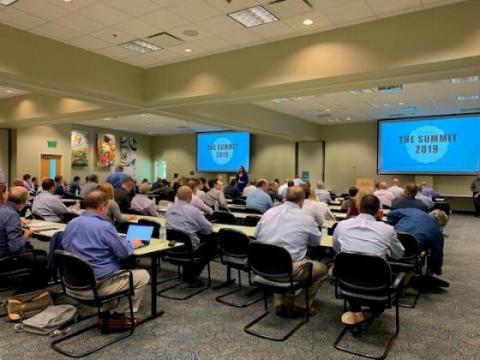 The retail industry is filled with acronyms and the seafood category has more than its share. One of the more unusual ones -- a uniquely Publix one, in fact -- is OIS. “Only in seafood,” is a phrase Pizzuti said is used at Publix due to the category’s many unique and interesting challenges.

“There are things that we deal with as an industry that if you are not in this industry, nobody would believe possibly could happen, but it happens every day, and none of us are shocked when it does happen,” Pizzuti said.

What happens in seafood has a lot to do with the sheer complexity of a category and an industry unlike any other in food retailing. Products are sourced globally -- they may be wild-caught or farm-raised, depending on a wide array of species and even subspecies, each with different harvesting methods. To top it off, the industry deals with unique labor issues and working conditions on ships, immense regulatory complexity ,and environmental and geopolitical challenges, a reality with highly migratory species that don’t respect national boundaries.

Pizzuti has had his share of OIS moments at Publix, having led the retailer’s seafood business for more than 20 years. Prior to Publix, the West Virginia native with a degree in marine biology spent six years with the National Marine Fisheries Service. A key moment in Publix's seafood sustainability journey occurred a little more than 10 years ago, when Pizzuti decided to hold the first seafood sustainability summit.

He wasn’t sure at the time about all of the details, or even the objective, but around Publix, employees quote founder George Jenkins the same way that Walmart employees quote Sam Walton. For Pizzuti, the quote that came to mind was “Begin -- the rest is easy.”

Except “the rest,” wasn’t so easy. Around the time that Publix and Pizzuti were embarking on a seafood sustainability journey, nongovernmental organizations (NGOs) active in the marine stewardship world were pressing retailers to publicly share a policy on sustainability. Publix never provided one, and Pizzuti, channeling George Jenkins again, explained the reason for this.

“Some companies are founded on policy. This is wrong. Philosophy, the things you believe in, is more important. Philosophy does not change frequently and is never compromised,” Pizzuti said, referencing one of Jenkin’s more obscure quotes. “We weren’t going to write a policy statement with do’s and don’t’s and hard timelines we weren’t capable of achieving. Instead, we wrote a philosophy statement about how we were going to conduct our business.”

The distinction between policy and philosophy can be subtle at times, but Publix's approach to sustainability is rooted in three clear foundational principles. For starters, Pizzuti believes that sustainability needs to be “pre-competitive.”

“Compete on quality, service, price, the knowledge you can provide and the availability of the products you have, but don’t compete on sustainability. Work together on sustainability,” he told attendees at the retailer’s seafood event.

Closely tied to the pre-competitive concept is collaboration, not on an individual company--to-retailer basis, but as a critical mass of suppliers working together with a committed retailer to effect change on a larger scale.

“Unless we all come together, we are not going to get lasting change that we are all looking for. We can’t move forward independent of each other,” Pizzuti said.

Last, the notion of continuous improvement is how Publix thinks about seafood sustainability. Pizzuti isn’t big on timelines and claims; that’s why the company wrote a philosophy statement rather than a policy statement, even though he’s been a tireless advocate for improving seafood sustainability. He also serves as vice chair of the Food Marketing Institute’s Seafood Committee.

“We’re not scared of what we’re doing, but the reality is there is a fluidity with this industry that doesn’t exist in other categories. It is a state of constant change, so to try to make claims that something is going to happen when you have zero control over what can happen doesn’t make sense,” Pizzuti said.

While Publix was averse to setting specific sustainability targets a decade ago, that never meant the company wasn’t an ardent supporter of NGOs that were setting targets to advance the cause of sustainable seafood. One of those, the Sustainable Fisheries Partnership (SFP), has an initiative called Target 75, which aims to ensure that 75% of world production in key seafood sectors is – at a minimum – either certified sustainable, green-listed in SFP’s Metrics tool, or making regular, verifiable improvements.

SFP founder and CEO Jim Cannon was among those participating in the Publix event. He recounted some of the group’s activities and reinforced Pizzuti’s “only in seafood” perspective of an exceedingly complex industry that requires perseverance among many stakeholders. A similar message was shared by John Connelly, president of the National Fisheries Institute (NFI), an advocacy group for the seafood industry.

Between SFP and NFI, the seafood industry is filled with NGOs and industry organizations focused on different aspects: resource sustainability, supply chain issues and labor challenges. The Marine Stewardship Council (MSC) has its certification standard, and the Consumer Goods Forum (CGF) has its Global Sustainable Seafood Initiative (GSSI), which isn’t to be confused with its Sustainable Supply Chain Initiative (SSCI). Then there are FIPs, or fishery improvement projects, which can be undertaken by any organization.

From a supplier's standpoint, the alphabet soup of organizations, initiatives and certification standards also adds complexity to the seafood industry. That’s why the catalyzing efforts of committed executives such as Mowitt and Pizzuti are invaluable to drive the industry forward, help Publix earn shoppers’ trust and sell more seafood in the process.