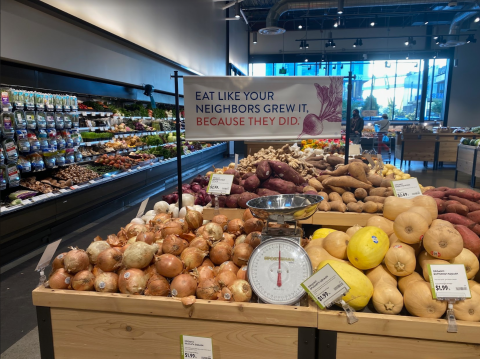 In response to consumers’ rising demand to know where their food comes from, PCC is highlighting its partnerships with regional purveyors through the Nowhere but the Northwest campaign.

Building on its dedication to celebrating all things local, PCC Community Markets has launched a new campaign at all 15 of its stores, which are located in the Puget Sound area of Washington state.

In response to consumers’ rising demand to know where their food comes from, the co-op is highlighting its partnerships with regional purveyors through the Nowhere but the Northwest campaign. With more than 7,000 local products on its shelves, PCC is spotlighting almost 100 area suppliers across the store via signage featuring brand information and why the grocer enjoys working with them, as well as offering special pricing. The items will also be promoted across PCC’s social media channels through Sept. 28.

Seattle-based PCC, a certified-organic retailer and the nation’s largest community-owned food market, offers fresh, organic, seasonal food that’s sustainably sourced from more than 800 local producers, farmers, ranchers and fishers. With an active membership of 90,000-plus households, the cooperative operates 15 stores in the Puget Sound area in the cities of Bellevue, Bothell, Burien, Edmonds, Issaquah, Kirkland, Redmond and Seattle. The co-op also plans to open new stores in downtown Seattle and Madison Valley, and, as mentioned above, relocate its Kirkland location.