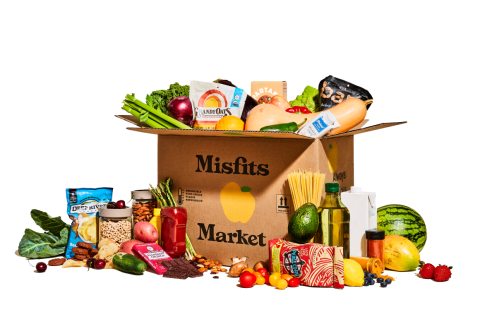 During the pandemic, Misfits Market tripled its farmer and supplier relationships to rescue food, preventing waste as well as considerable losses for farmers and producers.

E-grocer Misfits Market has raised $200 million in a Series C funding round co-led by Accel and D1 Capital, with participation by such existing investors as Valor Equity Partners, Greenoaks Capital, Sound Ventures and Third Kind Ventures. The oversubscribed round brings the company’s total funding to $301.5 million to date, enabling the business to officially surpass “unicorn” status, with a valuation of more than $1 billion.

According to Delanco, N.J.-based Misfits, the funding facilitates its ability to expand into every major grocery category and distribute across every underserved area nationwide to advance its goal of eliminating food deserts in America by 2025. Along with the Series C funding, Accel’s Ryan Sweeney will join Misfits’ board of directors.

During the pandemic, Misfits tripled its farmer and supplier relationships to rescue food, preventing waste as well as considerable losses for farmers and producers. The company saw fivefold growth in its active customers and order volume last year, shipping more than 77 million pounds of food to 400,000-plus customers across the United States. In just the first four months of 2021, the e-grocer has rescued the same amount of food as it saved in all of 2020.

“In 2020, Misfits Market found itself in the middle of a global sea change – the food supply chain experienced a once-in-a-100-year disruption, with major institutions and households changing the way they source and consume food,” said Misfits founder and CEO Abhi Ramesh. “With this capital infusion, we plan to complete our expansion to the West Coast, and continue to expand the selection of organic produce and high-quality, sustainably sourced proteins and pantry items, getting us one step closer to our mission of making sustainable and affordable food accessible to every community across America.”

“Direct-to-consumer models aren't anything new in the food industry, but the approach Misfits Market has taken is,” added Ryan Sweeney, partner at Palo Alto, California-based global venture capital firm Accel, and Misfits’ newest board member. “Instead of focusing only on their end customer, they've managed to create a dynamic solution that also supports food suppliers at every level.”

Since Misfits raised $85 million in Series B funding last July, the company has grown its footprint and begun introducing new offerings, including the following initiatives:

Greater Delivery Capacity: After opening its new 250,000-square-foot headquarters in Delanco, the company was able to more than double its order capacity to the states it serves in the eastern United States. Additionally, Misfits added 10 new states to its delivery areas within the last year alone, and currently offers more delivery days than most of its competitors – up to seven days per week. Since its founding, Misfits’ distribution network has reached markets currently underserved by other direct-to-consumer and chain grocery store delivery services, according to the company.

Western Expansion: Misfits Market established its West Coast headquarters in West Jordan, Utah, and is building out a facility in the region, with plans to bring more than 2,000 jobs to the area within the next five years. Next on its to-do list is expansion into the Pacific Northwest, with the company having taken its first orders in Oregon and Washington state on April 21.

Further, to continue building and carrying out the company’s distribution plans, Misfits has hired executives from Walmart, Amazon, Boxed, Casper, Wayfair, Jet and Warby Parker, and intends to double its current workforce of 1,000-plus employees with new recruits in the next year across all teams, including product, engineering, marketing and operations.

Bentonville, Ark.-based Walmart U.S. and Seattle-based Amazon are Nos. 1 and 2, respectively, on The PG 100 list, Progressive Grocer’s 2020 list of the top food and consumables retailers in North America.