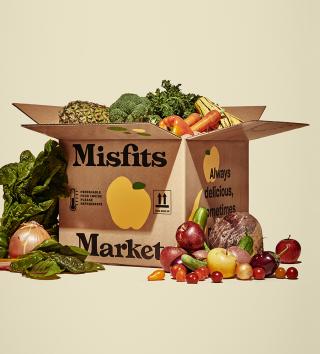 Misfits Market, a Philadelphia-based fresh produce delivery service, has revealed plans to expand throughout the entire Eastern Seaboard and the closing of $16.5 million in Series A funding led by Greenoaks Capital. The company’s latest expansion encompasses all ZIP codes in Washington D.C.; Maryland; Virginia, and West Virginia; with service to all of North Carolina, South Carolina, Georgia, and Florida set to roll out through the remainder of the year.

The move follows Misfits Market’s most recent launches in Ohio and Maine last month and is part of the brand’s strategy to expand to all of the eastern United States by the end of this year.

The company also recently opened a 140,800-square-foot facility in Pennsauken, N.J., featuring a state-of-the-art refrigeration system and a cold-storage distribution hub to grow the company’s East Coast operations, as its new headquarters and distribution center.

“By making misfit produce more accessible and affordable, we’re able to reduce food waste at a scale that creates positive and lasting impact,” said Misfits Market CEO and founder Abhi Ramesh.“Delivering to every ZIP code in the states we serve allows us to go beyond dense urban areas and put healthy food within reach of every household while supporting responsible growing practices.”

According to a 2014 study conducted by the U.S. Environmental Protection Agency, more than 38 million tons of this food is discarded. After examining such inefficiencies in the food supply system, Ramesh sought a solution that addressed farm-level waste in addition to the accessibility issues affecting millions of Americans living in food deserts.

Introduced in the summer of 2018, Misfits Market has gone from a four-person team delivering in the greater Philadelphia area to a current staff of more 200 serving customers across 11 states, and still growing.

Led by an undisclosed group of strategic investors, the $16.5 million in Series A funding will be used to further the Misfits Market’s goal of making fresh produce more accessible to people everywhere while breaking the cycle of food waste.

The service’s boxes can be purchased online on a one-time or weekly/biweekly subscription basis. Each delivery contains a variety of seasonal organic produce, including kale, lettuce, arugula, squash, cauliflower, tomatoes, potatoes, apples, peaches, plums, celery and cabbage. Currently, Misfits Market delivers to Connecticut, Delaware, New Hampshire, New Jersey, New York, Maine, Massachusetts, New Hampshire, Ohio, Pennsylvania, and Rhode Island and Vermont. Items are delivered directly to subscribers’ doors at up to 50 percent off supermarket prices. By teaming with organic growers and developing an efficient fulfillment system, Misfits Market is able to reach consumers in every ZIP code within all states where it operates.

In related news, a fellow produce e-tailer with a similar mission, San Francisco-based Imperfect Produce, is rolling out its own services to the Newark, N.J., area, having opened a warehouse in Moonachie, N.J.