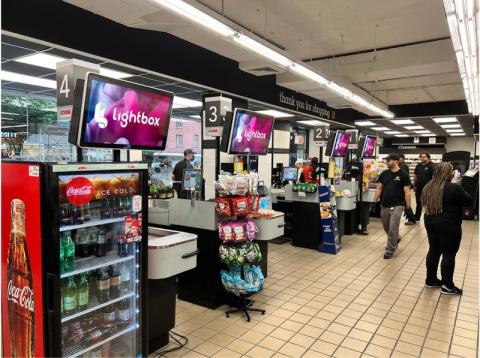 Lightbox, a provider of digital out-of-home video, has expanded its retail media network to include 2,800 grocery stores and 3,000 screens across the country. They join Lightbox’s national mall assets to further extend the company’s video reach in point-of-sale venues.

As a result of the expansion, more than 100 grocery banners, including Albertsons and Giant Eagle, now have 30-inch screens mounted on Redbox kiosks primarily at store entrances, while a New York City-centric network in partnership with Holland, Ohio-based Velocity MSC provides sister chains D’Agostino and Gristedes with 31-inch screens at checkout. These prominent digital video placements are strategically positioned to help advertisers connect with shoppers throughout their store visit.

“Demand for these audiences is very high, and this is something our team has been working on for over a year,” said Greg Glenday, CEO of New York-based Lightbox. “We didn’t want to dip our toe in the water; we wanted to go big. This network significantly increases our screen count and delivers a very distinct audience across some of the biggest grocers in the U.S. These are high-frequency destinations – with American consumers going to the grocery store on average 1.9 times per week – and the screens provide an invaluable connection point for advertisers to reach audiences in brand-safe environments. Since we’re already experts in effectively reaching consumers in a shopping state-of-mind via our mall network, the grocery locations are a natural extension of our retail media portfolio.”

Additionally, through a partnership with marketplace advertising platform Pacvue, Albertsons is expanding access for CPG manufacturers to advertise within its stores. Pacvue users can now leverage it to create, execute and manage sponsored product advertising campaigns with the grocer’s retail media arm, Albertsons Media Collective. The Albertsons media network is powered by the CitrusAd open API, which connects Pacvue to Albertsons’ e-commerce sites.